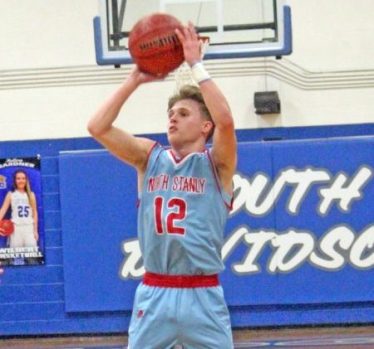 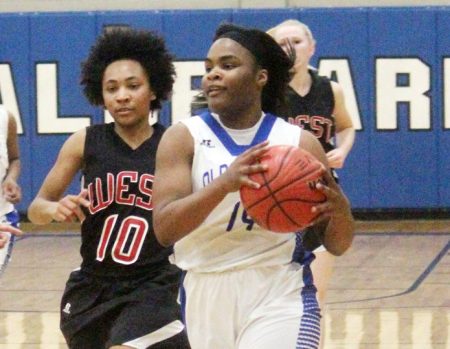 With this year’s All-Stanly News and Press basketball teams, we have decided to do things a little differently this year.

Using the various All-Conference selections from the Rocky River and Yadkin Valley conferences, along with statistics from the coaches and my own observations, I will be choosing first and second All-SNAP teams along with honorable mentions.

Not being named All-Conference does not preclude a player from the All-SNAP team.

Bryson Childress (G-Sr., North Stanly, 26.1 ppg, 4.6 rpg, 4.9 spg) – The all-time scoring leader in Stanly County basketball history, Childress scored 2,187 points for his career including 783 points this season. He scored 20 or more points 24 times this season and had 30 or more nine times, with a season high of 38 points. Childress is also the 2018-19 SNAP Men’s Basketball Player of the Year.

Marc Raye, Jr, (G-Fresh., Albemarle, 18 ppg, 6 apg, 4 spg) – Just the second Bulldogs freshman to be named All-Conference, Raye was second in the county in points per game and first with six assists per contest.

Jaquez Cooke (G/F, Jr., South Stanly, 14.3 ppg, 1.2 apg, 1.4 spg) – Playing both guard positions as well as some small forward Cooke was fourth in the county in points per game. Along with teammate Jacorian Legrand, he was part of the was the county’s strongest scoring backcourt combining for nearly 29 points together per game.

Carson Lowder (G/F-Sr.,, North Stanly, 12.8 ppg, 4 rpg, 1.9 apg., 1.4 spg) – The senior slightly increased his points per game average this season and finished with 708 career points in two seasons for the Comets, hitting 41.6 percent for the season from the field.

Jacorian LeGrand (G-Sr., South Stanly, 14.8 ppg, 4.4 rpg, 2.8 apg, 2.6 spg) – Despite being one of the shorter players on the court at any given time, LeGrand was fourth in the county in scoring and rebounded as well for the Rebel Bulls.

Austin Medlin (G, Soph., West Stanly, 15.3 ppg, 4.4 rpg, 2.3 apg, 1.8 spg) – Shooting 81 percent from the free throw line for the season, the sophomore guard helped take up much of the scoring for the Colts with the injury to Nick Parker. Medlin, according to head coach John Thompson, was also the most improved defensive player for West this season.

Brandon Christian (F, Sr., Albemarle, 11 ppg, 8 rpg) – A season-ending knee injury ended the forward’s season after 21 games, but not before the senior, who signed to play football for Catawba next season, came close to a double-double average in points and rebounds per game.

Nalik Veasley (C, Sr., North Stanly, 10.0 ppg, 10.6 rpg) – Shooting 50.4 percent for the season, Veasley was the only county player to average a double-double in points and rebounds.

Armani Baldwin (G-Sr., Albemarle, 15.0 ppg, 4.2 rpg, 2.1 apg, 4.0 spg) – With one of the most impressive high-arcing jumpshots, the senior guard nearly doubled her points-per-game average this season. Baldwin was also second in the county in steals per game in being part of Albemarle’s record-setting season for wins (27).

Danielle Werts (G-Jr., Gray Stone, 14.3 ppg, 1.3 rpg, 1.9 apg, 2.0 spg) – Werts’ touch from the outside and her leadership helped the Knights reach the 20-win mark for the fifth straight season; the junior’s point average per game was third in the county.

Zycoria Tillman (G/F-Sr., Albemarle, 16.9 ppg, 7.3 rpg, 2.1 apg, 3.0 spg) – This season’s All-SNAP Player of the Year, Tillman led in points per game and was third in rebounds per game. She finished with 1,073 total points in three seasons with the Bulldogs, becoming the fifth Albemarle women’s basketball standout to join the 1,000-point club.

Secorra Medley (F-Jr., Gray Stone, 10.6 ppg, 10.3 rpg) – Medley was part of a Knights defense this season which presence allowed just 37.3 points per game this season; she also led the county in rebounds per game.

Payton Landis – (G-Jr., North Stanly, 8.9 ppg, 5.3 rpg, 3.1 apg, 2.6 spg) – Landis’ touch from the outside helped her to be seventh in the county in points per game but her distribution of the ball made her the county leader in assists per game.

Camille Shelton (F-Sr., North Stanly, 12.6 ppg, 8.9 rpg, 1.9 apg, 3.3 spg) – Normally tasked with playing in the front court against taller players, Shelton was second in the county in rebounds per game and was fourth in scoring.