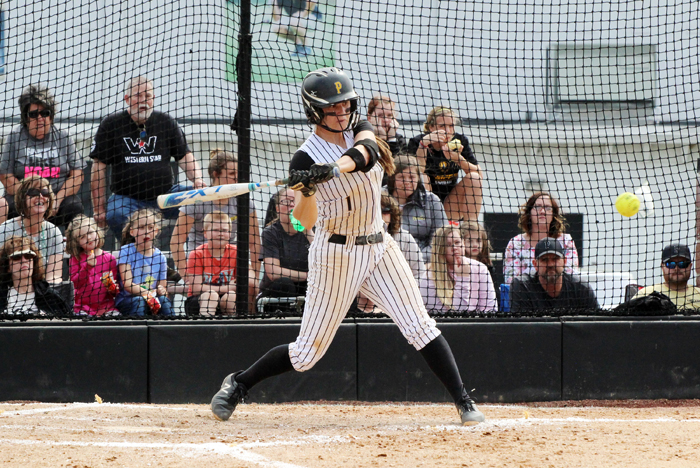 The recent successes of the Pfeiffer University softball team can be traced in part to the team’s two seniors, who have set new standards for the program in terms of individual records as well as the team’s overall success.

Shortstop Vada Blue Sherrill and pitcher Kiana Millsaps, who were teammates in high school before joining the Falcons, have set program records this season as well as reaching marks which rank among the best performances in the history of college sports.

Having played for her father, Pfeiffer coach Monte Sherrill, and won state championships at Alexander Central, Vada Blue took the successes she earned in high school to the next level when signing with the Falcons.

In terms of Pfeiffer records, she has the highest career batting average (.387), on-base percentage (.505) and is second in slugging percentage (.655) behind her teammate, junior Makenzie Pennell (.671).

“I don’t take (setting records) personally. If we lose and I set a record that game, I’m more focused on the loss than anything. I try not to ever look at my stats or ever try focusing on me. Breaking records is great and all, but I really just try to focus on helping my teammates out, helping our pitchers on defense and just doing my part to get us a ‘W’ in the game,” Vada said.

She said she owed her career hit total and the consistency of it to the “hours and hours” of work she has put in with the team’s coaching staff.

“And I mean, to play softball, you got to have some internal motivation and some grit, because a lot of times it’s a love-hate relationship,” Vada said. “So you’ve got to have that internal drive and that will to love the game.”

Discipline is the word that best describes her team, she added, something she and her teammates show on and off the field.

“You aren’t ever going to see us making our program look bad. Discipline is most definitely taking care of the little things and making sure that we’re always getting one percent better, never being satisfied.”

That attention to detail, Vada said, will get a player taken out of a game no matter what the score is.

“We expect perfection out of all of our players. And I mean, if you don’t make the cut that one pitch, somebody’s gonna have to come in and do your job. Accountability is a huge thing in our program.”

In her final season, Vada said she would love to have majored in softball if she could, but she will be graduating with a degree in physical education. The ideals she learned playing softball, she said, will help her after her time in college.

“A lot of times, we will use scenarios that happen on the ball field and translate them into real life…if you’re a nurse and you don’t know what’s going on, somebody dies. If you aren’t doing your job, then that’s a life. So I mean, we sort of focus on putting it into real life perspective, which I really appreciate it,” Vada said. 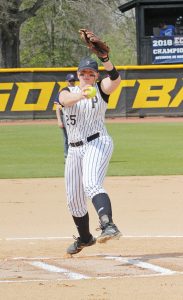 Millsaps has done her damage in the pitching circle for the Falcons, recently becoming the program’s leader in pitching victories and entered the season third in lowest career earned-run average (2.10). She also ranks among the top 10 in strikeouts. She has the record for most wins in a season, winning 24 last season.

She credits players like Sherrill and Pennell, whom she played with in high school at Alexander Central, for their efforts defensively as well as the rest of the team.

“I’m personally a pitch to contact pitcher. So really what helps me out is that we have the best defense in the league. I know anytime that they hit the ball, I have everyone behind me,” Millsaps said.

The victories mark she has for Pfeiffer is more of a “whole team record,” she added, because of how her teammates back her up defensively dring the game.

“The Lord’s blessed me, but it’s just about working together…we just feed off each other,” Millsaps said.

Pfeiffer has strength as a team because of its shared principles of God and softball, she said, adding the team’s big thing is hustle.

“We’re hustling everywhere we go. And just having like a straight mindset. So it’s not just all physical; we also have the mindset, so that is something that we talk about a lot.”

The senior pitcher also talked about the work spent in practice going over the minute details of the game, saying she and her teammates, “go over everything so the game is easier. That paying attention to detail helps us in the game.”

She also said the work she has put in on the diamond and the principles the team has had will help moving forward in life with her nursing degree.

“Working hard is something that we did that we talked about a lot here. So I think that really will help in my work ethic,” Millsaps said.

In their three seasons under coach Monte Sherrill, the Falcons have won nearly 82 percent of the team’s games with six more to play in the regular season. Pfeiffer is 150-34 in that span of games, winning a conference tournament title in 2016, the regular-season title in 2017 and an ECAC tournament championship last year.

Coach Sherrill said he was proud of both seniors for staying in line with the team concept, saying “they have that kind of mindset looking as Pfeiffer, not themselves.”

Referring to the seniors as being some of the “building blocks of what we have rolling right now” in the development of the softball program, the coach said he is proud of how the program has advanced.

“The records before they got here were average, at best. Since they have been here, they are setting records that will never be broken,” Sherrill said.

The seniors’ approach to the game, the coach explained, has shown the newer players to the team the right way to do it.

“It’s the way they go about it in a worksmanship, blue-collar type of atmosphere that breeds that into the younger players so it becomes natural for all of them,” Sherrill said. “It’s something as a coach you really enjoy, watching kids mature.”

With recent wins over North Carolina Wesleyan, the head coaching win record for the Falcons’ skipper has surpassed the 900 career win mark, including his 754-60 mark in high school at Alexander Central and Central Cabarrus along with 10 NCHSAA state championships.

“They act like a bunch of Marines; they go out and do their jobs…that’s going to transfer into when they are nurses or teachers. That’s the joy of transferring what happens on the ballfield to a kid that uses it in real life,” Sherrill said.

Having watched his daughter and Millsaps grow up living a mile from each other playing rec basketball and softball throughout the years, the coach said “they haven’t changed; they are the same kids. It’s been my pleasure.”

It may be “tough love” sometimes, he added, but the coach said he loves all of his players.