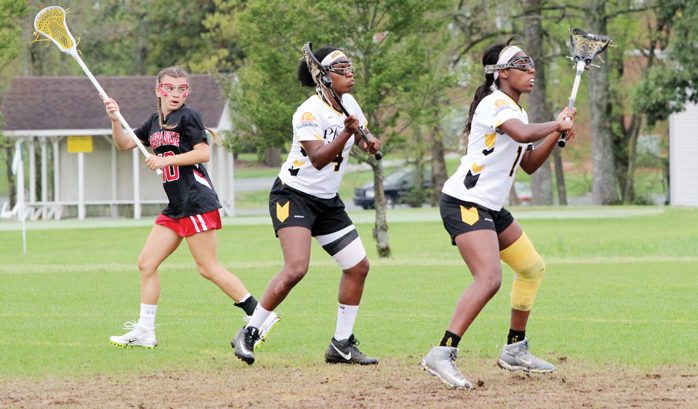 Twin sisters Starneice (No. 4) and Startraya Gallaway patrol the middle of the field for the Falcons in a win Sunday at N.E. Lefko Feld. (Photo by Charles Curcio/staff)

The pair, both serving in the National Guard, are wrapping up their junior season of eligibility for the Falcons. Pfeiffer is 9-1 on the season, including a 25-4 destruction of Lagrange on Sunday. The sisters combined for four goals in the win, with Startraya scoring three times.

For the season, Startraya and Starneice have scored 41 of the team’s 132 goals and rank second and sixth overall in points on the team, respectively

The twins from Winston-Salem began playing lacrosse at R.J. Reynolds when Startraya had it suggested to her by a friend she could be good at the sport. Both sisters ran track for the Demons in the short and mid-range relay events.

Startraya said she had no idea how to play the sport until a friend of hers suggested she go with her to tryouts as a freshman. She realized the sport required a stick and ball, but she did not know what to do.

She realized she could play because of her running ability, saying “90 percent of lacrosse is running and I’m slightly good at running. I think that’s how I made varsity (as a freshman).” 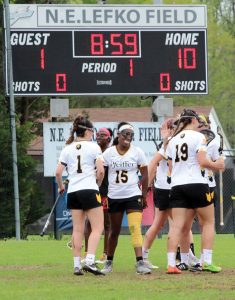 Startraya Galloway (No. 15) and her Pfeiffer teammates celebrate one of her three goals in Sundays win over Lagrange. (Photo by Charles Curcio/staff)

Learning the sport over time did make her slightly different than her twin until her sister asked if she could play, too. Startraya laughed, saying it was “the one thing that kept us different” but added she told Starniece “of course, I wouldn’t be upset if you played. I love you.”

Despite their identical outward appearance, the two sisters do have some subtle differences in their games. Startraya is right-handed while Starniece is a lefty.

Both play in the midfield, but in recent games like Sunday, Starneice played more on the attack while Startraya was back on defense.

Startraya said understanding the sport in general, such as how to move and run in different angles, were some of the factors for both sisters as they learned the game.

“I was good at defense because I’m fast. My coach said pick a girl and stay with her. I was like, ‘That is so easy for me to do,’ ” Startraya said.

She said she did not want anyone early on to pass the ball to her because she didn’t know what to do with it.

Starneice said having her sister on varsity while she was on JV their freshman year helped her because she struggled early on trying to play like her. The most difficult thing for her was discovering her best position on the field.

The two eventually were looked at by several schools, including Pfeiffer, but the Falcons coaching staff’s willingness to work with their military commitment schedules made the difference in choosing the school.

Both sisters still serve in the National Guard. Starneice is a military intelligence analyst while Startraya is a medic. Starniece missed the 2018 season with the Falcons because her guard unit was deployed in Iraq.

Having been overseas last season and returning helped give Starneice pride in her country as well as developing “a bigger heart when it comes to the (lacrosse) field because it’s a different world (overseas).”

She said coming home from Iraq reminded her of the many blessings she has as an American.

“I try not to take anything for granted for even a moment on the field,” Starneice said.

Startraya said she joined the National Guard after her sister because she “advertised it as we could get paid for working out. I was just like, ‘Well, OK!’ ”

The rigors of military training do prepare them for playing lacrosse, but that training also overworks the body, Startraya explained.

“When you have things back to back, morning training then coming to school all day and having practice, it’s kind of difficult sometimes, but in the end it will pay off,” Startraya said.

Starneice credited lacrosse for keeping she and her sister together for a little longer because the two will eventually have separate military training. Having a little more time together has helped both as individuals. She said her sister helped her become a better player.

Startraya said lacrosse has helped her deal with stress.

“It’s one of those things I can do to kind of get away” from school, the military or anything else, she said.

She said she can get her aggression out in a sport that has contact despite being non-contact, at least theoretically.

The twins’ lives have also been in part about stepping outside the norms of what people expect, both as African American women in sport and the military.

Startraya said she likes to step out of the comfort zone of those norms in “doing things that society doesn’t think African Americans or females should be doing.”

“I love being one of those people to step outside those barriers and show we can do this. We can get along and be diverse,” she said.

She also said attending a private school like Pfeiffer is another way of stepping out of their comfort zone.

The sisters want to be mentors and role models for other young African American women, saying “they don’t often see people that look like them doing great things, being better then average” in sports along with movies and other aspects of pop culture.

“Being that person to say, ‘Hey, I’m just like you and you can be just like me,” Starneice said.

Beyond the lacrosse field, both sisters said they want to also show young African American women they can be successful in a male-dominated industry like the military.

“I love being that female that can meet the standards on a guy’s scale. Don’t say we have different tiers because I’m just where you are physically,” Starniece said.

Starneice’s job as a military intelligence analyst is to find, know and never lose sight of the enemy in her work with the 449th Combat Aviation Brigade, her current assignment.

That work in the military also translates on a certain level to playing lacrosse.

“Being able to put your mind into a different person or the enemy’s mindset is definitely beneficial when it comes to the civilian world,” Starneice said.

As a medic, Startraya, at 5-foot, 6-inches tall, has to be in supreme physical condition in order to be able to carry soldiers out of dangerous situations to treat them.

“I constantly have to work out to be able to pull and drag these full-grown men around that are twice my size,” Startraya said.

She added being a medic and working in medical care has made her more aware of her teammates and people in the world in general.

“If I see someone hurting, it automatically makes me want to check them out and see if they are OK,” Startraya said.

Balancing the time between school, lacrosse and military has been difficult for the twins, but both are in their junior year at Pfeiffer. Startraya is a criminal justice major and says she and her sister’s lives are hectic at times. She said they both are managing things slowly but admits they both do need a break, having not really had one since high school.

Starneice, majoring in accounting with a concentration on financial fraud, will be going into forensic accounting, focusing on money launderers and other illegal activities after her time at school.

She added she wants people to know that even though Pfeiffer is a small university, one can make it a home like they have.

“You just have to have a positive attitude and understand that life happens, but it’s the way that you react to your obstacles and how you grow in life that will determine the young adult you will become. Stay positive; life will happen,” Starniece said.

Startraya also credited Pfeiffer for working with them when she had military training which lasted to December. She was allowed to start in school in the spring rather than the fall.

“Pfeiffer did a really good job as far as helping me transition back to society and school,” she said.

The best advice the twins had for anyone going to school came down to two words: get involved.

“Get involved because time flies and you don’t want to regret not being involved. Life is about experiences, but make sure you know your limitations and how to balance your life.”