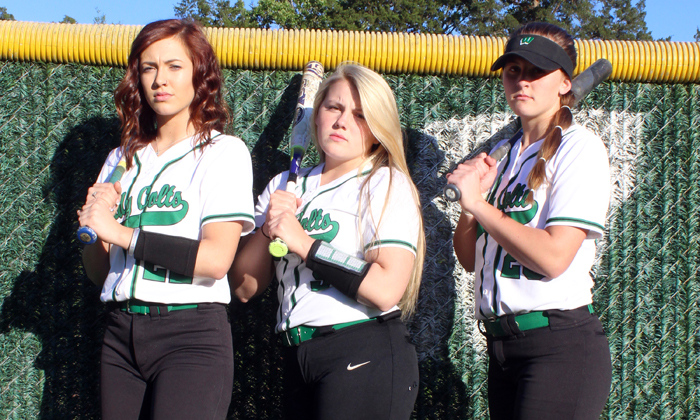 The West Stanly softball team’s ability to keep other teams off the scoreboard this season has helped lead to the team’s success. Having allowed 19 runs in 16 games entering Monday’s home game with Mount Pleasant has lead to the team’s win streak to start the season.

However, the efforts defensively of the Colts along with the high level of pitching from starter Jordan Hatch would be wasted without offense to balance the team’s efforts. Three batters in particular have helped form a Bermuda triangle for softball to disappear over fences.

An example of the trio’s impact included Monday’s 9-0 win over Mount Pleasant to earn at least a share of the regular-season RRC championship. The three batters combined for five of West’s seven hits and five RBIs. McRae’s solo home run in the bottom of the second inning gave the Colts the early lead, then Barbee’s grand slam was part of an eight-run sixth inning which put the game out of reach.

McRae said runs for the Colts have come from “everybody pulling together and knowing when to come through…in practice we focus and make sure we don’t goof off. Our practices are tight, especially hitting-wise.”

Defensively, McRae said the chemistry between herself and Hatch has been strong.“We have worked really well since she came here. We’ve always just clicked automatically.

Stockton said offense is a team effort adding “sometimes we get down but we always pick each other right back up.”

The West second baseman also talked about the team’s defense saying “Coach Carter says our number one thing is backing (Hatch) up. She’s throwing fire out there; we have to be there to back her up.”

Barbee said West’s offense comes from the amount of time the players and coaches put into working on drill to perfect mechanics with a lot of repetitions.

West’s offense, Barbee added, works a lot off momentum as well, saying “we have had games that are really close, one person gets a hit and its contagious. Everyone starts hitting.”

The win for West was the team’s 17th victory in as many games this season and kept the Colts atop the 2A standings on MaxPreps and second overall in the state regardless of classification.

“We were good last season but going 17-0, I wouldn’t trade that for anything,” West’s senior catcher McRae said.

Barbee added West’s success this season has been “heartwarming” after the team’s disappointing losses last season. She added “knowing we are this sharp after losing amazing players (from last season) it helps us know we can do this on our own.”

West Stanly goes to Mount Pleasant Thursday night for its final game of the regular season. A win would give the Colts a perfect conference mark heading into the RRC tournament April 29 at Anson County.