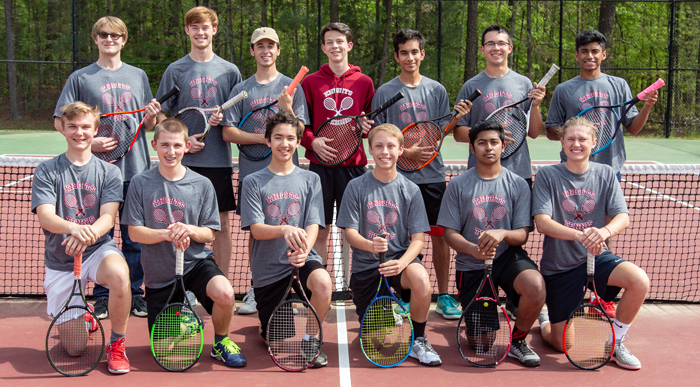 The 2019 men’s tennis season for Gray Stone has been one of returning to past success with a coach with a proven record of winning.

Gary Moran, who coached the Albemarle tennis team for 27 seasons and earned eight conference titles for the Bulldogs, had been asked repeatedly by parents of Gray Stone tennis players to coach the Knights.

Moran along with a talented group of players have accomplished a feat the Knights had not seen in men’s tennis since 2014: an undefeated regular season.

Gray Stone posted a 7-2 win over Albemarle on Monday and a 9-0 sweep of North Stanly Tuesday to finish 16-0 overall and 14-0 in the Yadkin Valley Conference winning the conference title.

Three of the team’s six singles players posted perfect records this season: No. 3 seed Marshall Overcash (11-0), Rohan Sharma playing in both fourth and fifth seeded matches (16-0) and No. 2 seed Lee Boone (14-0). James Stokes and Lance Gould both played at No. 5 and six singles; their combined record was 18-0.

Top seed Kevin Agner finished 14-2 overall for the season as the top seeded singles player while Robert Shelton, playing No. 4 singles, was 13-1 on the season.

Doubles’ play has also been strong for Gray Stone; the combinations of Agner/Boone as the top seed and Overcash/Shelton at No. 2 are both undefeated this season.

Moran said when taking over as the Knights’ head coach he “found the young men at Gray Stone eager to get better and ready to take some instruction.”

His first season last year, Gray Stone finished second to North Stanly, but Morgan said he felt the team would be even more successful.

Agner and Boone “are excellent athletes and accomplished players,” Moran said, noting both have qualified for the 1A Western Regionals three times. While both could play tennis in college, he added, both “are focused on academics and will successful next year in a college classroom.”

The team’s strength this season, Moran said, was its depth. Agner and Boone both played and won top-seeded matches while Overcash, Shelton and Sharma all won matches at both No. 2 and No. 3 seeded matches.

“We had a good time together, pulled for each other and guys stepped up as needed to win when teammates were absent,” Moran said.

The YVC is not as strong in tennis as it once was, Moran said, which could lead to a challenge May 7 when the 1A state dual team tournament is scheduled to start.

Despite the challenge of playing tough teams in the playoffs, Moran said “I can guarantee my guys will play hard and compete as long as they are on the court and we will see just see how good we are.”