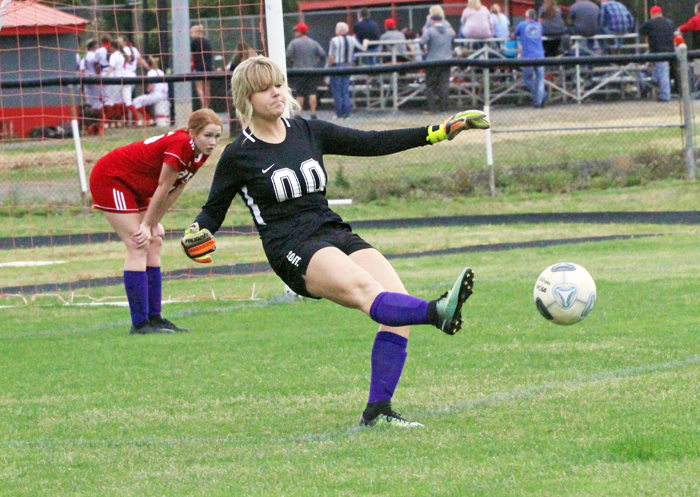 South Stanly senior goalkeeper Josie Hinson puts the ball into play during the first half of Wednesday's home win over North Stanly. (Photo by Charles Curcio/staff)

Under the lights at the South Stanly football stadium is where women’s soccer has been played for many seasons.

In the past, most teams traveling to Norwood got back on the bus with a victory.

This season has been vastly different for the Rebel Bulls. With seniors like goalie Josie Hinson and forwards Whitney Lowe and Hannah Crump, along with first-year coach Michael Curlee, South has gone from a team struggling not to lose to a team playing to win.

South is 11-4 overall and 10-4 in Yadkin Valley Conference play after Wednesday’s 3-2 victory over North Stanly.

With loud reactions coming from both sides of the field, two county teams with strong rivalries in other sports may be rekindling acquaintances. The game featured a yellow card, physical play and fouls along with two teams giving their all to come out on top.

Wednesday saw the teams score three goals in the first nine minutes, with the Comets getting an early 2-1 lead on goals from Brinn Kimrey and Lexi Goode. Whitney Lowe tied the game with 10:54 left in the first.

The tally that decided the game came midway through the second half. A handball in the penalty box called on North gave South a penalty kick. Freshman Keelie Crisco slipped a shot underneath a diving North keeper for the only goal of the half, giving South the win.

This season, South won back to back games for the first time in recent memory, posting wins early in the season over North Rowan and Uwharrie Charter by 9-0 scores, something which used to happen more often to the Bulls rather than for them.

The Bulls’ longest win streak of the season was four games, including a 5-1 win on the road against Wednesday’s opponents, the Comets, whom perennially have fielded competitive teams.

In terms of win total and winning percentage, South’s season has also been the best in recent memory.

Playing on the left side as a forward, Lowe said the team “definitely has a lot more support” this season.

“We didn’t even know we were going to be able to have a team,” she said of last season.

Lowe said Curlee was responsible for recruiting players to this season’s team.

She gives much of the credit of the team’s success to its coach.

“He really pushes us,” she said. “He’s very disciplined as a coach and he holds us accountable for the things we do.”

Beyond discipline, Lowe said Curlee “doesn’t let anybody slide. He really pushes us to be the team we know we can be.”

Lowe, one of nine seniors on the team, said South’s players have put in the work this season, one in which the players have “come out here and taken the bull by the horns.”

Hinson said Curlee “has always just been like the type of coach that you can come to whenever you have a problem. The coaches in the past we’ve had on the team just weren’t. They were more focused on winning. They weren’t focused on the family aspect of a team.”

South’s keeper said the difference with Curlee is he has a passion for kids to want to see them achieve, adding he is “truly invested.”

Wednesday’s win came on Curlee’s birthday, so the team made him a birthday card. Hinson said it was because he has shown he cares.

Hinson said the team has grown much over the past three-plus years. She and her teammates are “humbled by the fact we actually got to come out here and win this year. It means more to us because we have worked so hard to get here.”

She added having endured the losing streak also makes the players appreciate more this year’s success.

The team’s leading goal scorer, Crump, has 17 goals this season in just nine games. She was sidelined Wednesday due to injury but said she hopes to be back soon.

Having played on the team since her freshman year, Crump has witnessed the team’s development, saying she knew the team did not have a reputation for winning when she joined. 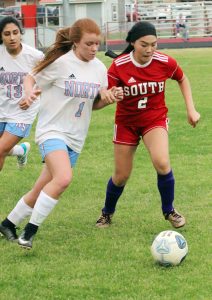 “Many players would play (for South) just because their friends were playing, but now people want to play (on the team). It’s so cool to see the difference that Coach can make with some encouragement and support.”

“This is my favorite season,” Crump added.

Curlee admits to not being the most knowledgeable coach when it comes to soccer, having been a wrestling coach for a number of years as well as recently coaching the school’s cross-country teams.

Curlee told his players after the win to “be classy” when shaking hands with the Comets, a phrase he said has been pivotal for the team this season.

“We want to show good sportsmanship because this is teaching them to deal with life in the future. Yes, everybody wants to win, but if you maintain your bering and character, keeping your composure out on the field, when the pressure gets tough it’s going to help, even in life in general,” Curlee said.

Nine of his players next season will be going off to college or joining the workforce, which Curlee said “if they can’t handle pressures out here on the field, it’s going to be worse out (in the world).”

The coach had taken the team to its final game of last season, which was a loss. However, the difference in that game, Curlee said, was the players had fun, an idea he carried over into this season when he took over as coach.

“They always had the talent; they just didn’t believe in themselves,” Curlee said. “I know very little about soccer.”

He added he was blessed to have a good group of girls, having around 24 on the team as opposed to barely fielding 10 or 11 last season. Numbers have helped to turn the program around, Curlee said.

The surprise of the team’s first win this season was a boost, he said, giving the players confidence that they could win.

“That belief you can do it and have the drive, you don’t stop. At this point, they don’t have any doubts. They know they can hang in there,” Curlee said.

The win for South put the Bulls one and a half games ahead of North for second place in the standings behind Gray Stone, who has already clinched the YVC championship. The Bulls, having already clinched a playoff spot, could potentially also host a first-round soccer game.

Curlee said the team has good parental support as well, but the wins are all about the players.

“They believe in one another. We talk about family, that you play with one another and watch each other’s back. I couldn’t be prouder of the kids. It’s all about the kids; this guy doesn’t know what he’s doing.”

South has two regular-season road games left and will be at Albemarle on April 29 and North Moore on May 1.