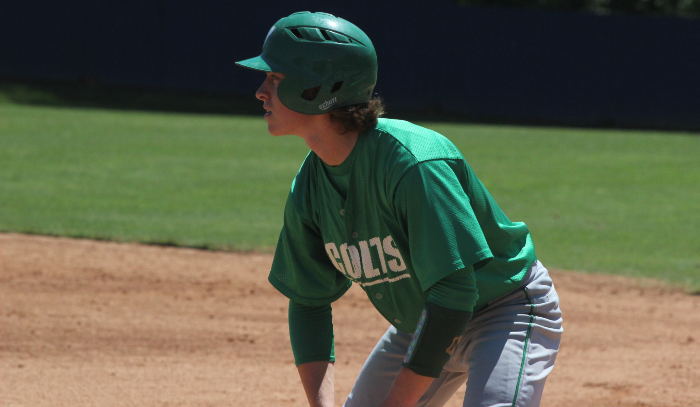 He stands 5-foot, 8-inches tall but the measure of his leadership along with his fellow seniors has helped lead the West Stanly baseball team to a strong regular-season mark.

Pitcher/right fielder Cody Kidd and the Colts wrapped up the regular season with an 18-4 record including Tuesday’s come from behind 5-4 win over Cox Mill in the third-place game of the East Rowan Easter Tournament.

Kidd threw five innings Tuesday allowing two earned runs on six hits with three strikeouts but did not figure in the decision. Freshman Charlie Carpenter allowed one run on one hit in the seventh inning to earn the victory.

“We’re definitely not the strongest team we’ve ever been. We definitely have some weak spots, but we have a team that just never gives up. We come out and we fight every day; we give everything we have on the field,” Kidd said.

Kidd, one of seven seniors on the team, said the way the team won Tuesday was a representation of how the season has gone for the Colts (18-4).

Another senior, Lukas Scott, drove in three runs including a two-run home run in the bottom of the sixth which put West up, 4-3.

In the top of the seventh, Cox Mill (16-6) tied the game with a sac fly. With two outs and a runner on second, senior center fielder Trent Wilson made a diving catch to keep the game tied heading to the last of the seventh.

Still another senior, Nathan Eury, singled in the bottom of the seventh scoring Wilson for the game-winning run.

West head coach Chad Yow said his team “has been a fighting club all year. We’re going to fight it out. We are one swing away from any ball game.”

Kidd said the team has been getting runs from all parts of the lineup Like Tuesday and Eury’s double.

The seniors are very close on West’s team, Kidd said, adding “we hang out all the time outside the baseball field and we spend all the time together on the field…we’re just like a family.”

As a leader on the team, Kidd said he leads through example, saying the other seniors on the team are much the same, less outspoken and more by their actions on the field.

In a recent tweet on the West Stanly baseball account, Kidd was noticed by the coaches sweeping the floor around his locker, which was fastidiously organized.

Referring to the tweet, Kidd said “if you can’t do it yourself, you can’t tell other people to do it. It shows that nobody is really above coming out and putting work in. You’re never too good for that.”

Yow said Kidd is the best player on the team, whether pitching, playing in the field or at the plate.

“He’s going to be the first one to the batting cage and the last one to leave. He’ll get his extra work in; it’s a testament to his character,” Yow said.

The West coach added the seniors have rallied to overcome adversity with some players not available to play and are “a group of fighters” that “ come out and battle.”

West Stanly will host the semifinals and finals of next week’s RRC tournament and will likely be a high seed in the state playoffs the following week.

Having a few days off before the conference tournament should be beneficial, Yow said, noting his players were a little tired, especially the pitching staff after having been on the field for games seven times in the past nine days.

“These kids deserve a break; we’ll get back to it next week,” Yow said.

Regarding the team’s momentum heading into the postseason, Kidd said, “We’re starting to get a little hot. We can definitely make a push. I think the best part of our season is ahead of us.” Kidd said.