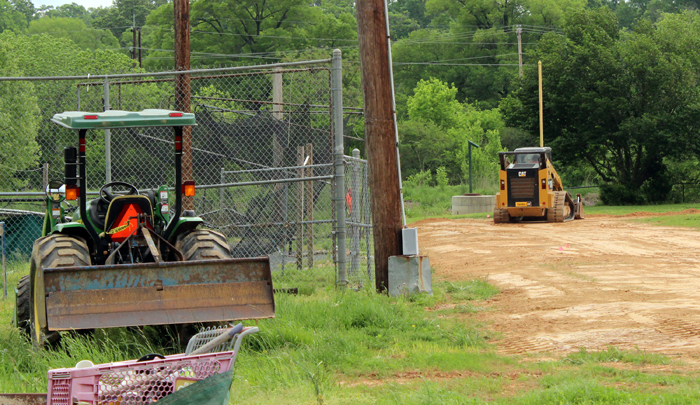 Employees from Moore’s Paving and Grading work at the field on Friday. (Photo by CHARLES CURCIO/staff)

Hurricane Florence swept through the Carolinas last fall doing a great deal of damage, including to the ballfields in Albemarle.

Since January, work has continued to rebuild Don Montgomery and Optimist parks along with work at Rock Creek Park. The work is still in progress with more to be completed along with a number of other projects underway by Albemarle Parks and Recreation.

Clean-up efforts began almost immediately after Florence and the storms following it dropped eight to nine inches of rain in the city.

The total cost for AP&R will be around $350,000, which the city pays for up front. Those costs are expected to be repaid from a Federal Emergency Management Association grant for which the city has applied, according to recreation director Lisa Kiser.

Fences went down initially along with cleaning up of the field in January. Moore’s Grading and Paving has been working on Don Montgomery Park. A new irrigation system was installed this week.

Additional grading on the field will be required before the field can be ready for play again. After the final grading efforts, grass will be planted.

“We are making repairs as fast as we can,” Kiser said, noting the recently built greenway also took some damage as well.

“We have met all our deadlines so far and are gradually sending the paperwork in when finished,” Kiser added about working with FEMA.

Before the city can recoup the costs, FEMA will have to conduct an inspection of the property, Kiser said.

She noted the repairs to the parks are to correct the damage suffered from the storms and not necessarily for any upgrades to the facilities.

“We are fixing it back the way it was,” Kiser said.

At Optimist Park, grading was scheduled to start on Friday with the hopes of improving the drainage to get water to flow back to the creek, according to AP&R’s Payne Caulder.

“We have had to cancel games because of the outfield instead of the dirt,” Caulder said.

He added Optimist was scheduled to be ready this summer, but because of how the park holds water, grading has not been able to be done on the field.