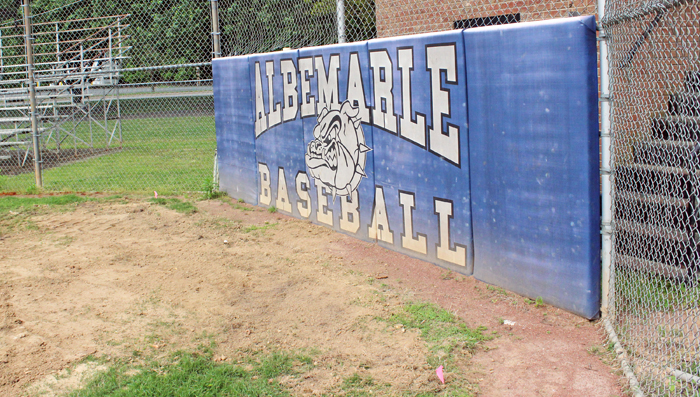 Flags in the ground behind the plate at Don Montgomery Park indicate where new irrigation systems have been installed this week. (Photo by CHARLES CURCIO/staff)

Weather has always played a part in the sport of baseball, but in terms of its destructive nature, nothing has caused as much damage recently to local fields as Hurricanes Florence and Michael.

In Albemarle, the two storms combined to cause two busy fields, Don Montgomery Park and Optimist Park, to become unplayable.

Repairs have been underway since January, but the impact continues in a baseball sense with the Albemarle high school squad and Stanly County American Legion Post 76.

Don Montgomery Park has been the home for the Bulldogs for many seasons, but in 2019 Albemarle was forced to play every game on the road.

Yadkin Valley Conference games were doubleheaders mostly, with the Bulldogs batting in the bottom half of the inning for one of the games.

Not having a home field has been impactful on the players. Gavin Oliveri said he knew after hurricanes Florence and Michael the field would need renovations but added “we never thought we had to play the season the way we have.”

Playing all away doubleheaders “has been rough,” but he felt it made the team “mentally tougher,” adding he was proud of the progress the team has made.

Gage Dennis, who left for Gray Stone his freshman year but came back to Albemarle the past two seasons, said Bulldogs team has a different vibe now.

Despite the team’s 1-15 overall record and 1-13 mark in conference play, Dennis stressed the importance of continuing to play, saying it has been fun despite the results.

“No matter how it may seem, none of the team’s leaders drops their heads, knowing good and well the younger players are looking up to us,” Dennis said.

He credits head coach Corey Dick for his work with the team, saying he “keeps our heads on” while reminding the players “it’s still a game.”

Judson Mabe said the season started sadly for he and his teammates, but said Dick “kept everyone focused on what we need to do while making it fun to play the game.”

Mabe, a junior, said he and the team’s three other juniors (Oliveri, Dennis and Morgan Bunch) have had to embrace leadership to help the team cope with the rigors of playing varsity ball and being on the road all the time.

“Our away doubleheaders have made us a better team. We have learned to play together and tough it out for two games back to back,” Mabe said.

He added the team “wears the blue and white with a lot of pride every single night.”

Bunch said the team has learned to play hard, not let their heads go down and be mentally strong. He added the season has taught him “to be the bigger person in a situation where the other guy is not. I think that shows very good character.”

The Post 76 baseball team had to find a new home as well with Don Montgomery Park not available. Stanly’s Legion squad had only one other option in the county for a park big enough to meet American Legion standards, according to post commander Cal Massingale.

Joe Ferebee Field on the Pfeiffer campus is the new home for Post 76, in part because Albemarle Parks & Recreation could not guarantee the field would be available by May. Having to schedule games several months ahead, Massingale said Pfeiffer was the only option.

The cost of the field for the season will be approximately $20,000, Massingale said, and the team is actively selling sponsorships to try and offset the costs.

Post 76, which has had a wide range of concessions over the past few seasons from normal fare like hot dogs and hamburgers to the unusual like beer-battered onion rings and ribeye steak sandwiches, will not be available to fans this season.

Massingale also said other visiting teams the past few seasons at Don Montgomery Park have expressed concerns about safety at the field.

The Legion program has also asked for repairs to the scoreboard and improvements to the restrooms as well.

Playing at Pfeiffer will mean the team’s players will get to play on a well-maintained field with fewer safety concerns, as well as a nicer place for fans to enjoy games.