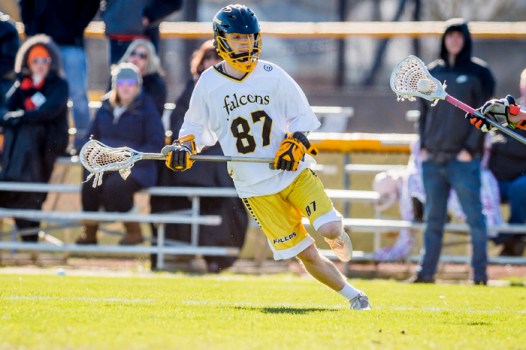 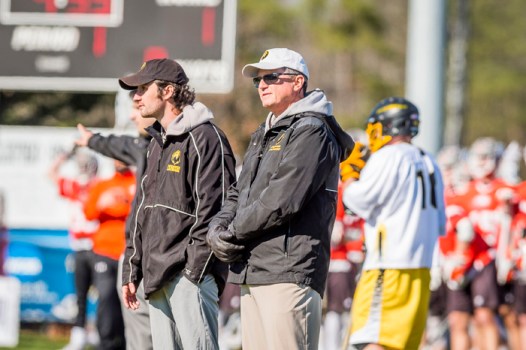 Pfeiffer coaches Tucker (left) and Scott Nelson study the action from the sidelines of a home game this season. Photo courtesy of Sean Meyers Photography/Pfeiffer University)

Success on the lacrosse field the last two seasons for the Pfeiffer men’s squad has been in part a family affair between a player and the coaching staff.

Junior attacker Jared Nelson has been among the best in the nation in assists and points, all the while being coached by his father, head coach Scott Nelson, and his brother, assistant coach Tucker.

This season, as the team waits to see if it will get an ECAC tournament bid, Jared lead all of Div. III with 7.1 assists per game and is second overall with 106 points (44 goals, 62 assists in 15 games), his second season with 100 or more points, which sets school records.

To be among the best in the nation, Jared said, is an honor but “without my teammates and coaches none of this would be possible.”

Much of the work he put in individually with his coaches taking extra shots and dodging repetitions has helped him develop his game, he explained.

Being coached by his father “was one of the main reasons I decided to come to Pfeiffer. I wanted the unique opportunity to play for my dad and brother.”

Jared said he works more with his brother, Tucker, because he coaches the team’s offense adding “the bond with the coaches is pretty unique.”

Scott Nelson said coaching his son has been a blast and noted his son’s toughness has been what has stood out to him the most.

“He has great game sense, but he really has become a tough player,” Scott said.

Coaching your own son at the collegiate level comes with its own set of challenges, according to Pfeiffer’s head coach.

“One of the toughest situations is proving you do not play favorites towards your son,” Scott said, adding he also keeping realistic expectations is another difficulty.

While also watching his son develop on the field, Scott has been able to watch a different kind of development with his son, Tucker, as his assistant.

“It’s been neat, seeing Tucker grow as a coach and Jared continue to expand his game has been very rewarding. Tucker has shifted into a role more specialized with the offense and the attack, so he deals more with them on a day-to-day basis,” Scott said.

The Falcons’ head coach said his long-term goals for his sons and for the team are to “continue to develop and improve each year” as the primary goal but to also “make sure every athlete graduates from school.”

Working in a space between his father the coach and his brother the player has been fun and rewarding thus far, Tucker said, but not without its own challenges.

“Like anything there are struggles at times,” Tucker said.

One challenge, echoing his father’s sentiments, was to hold Jared to “an unrealistic amount of expectations. As a brother, and a coach you expect a lot of your players, especially a family member, I think that is one of the bigger challenges is setting realistic expectations.”

Tucker said sometimes he finds himself as a middle man between the two, especially after turnovers from Jared, which has not happened often this season (two turnovers per game).

“Predominately our staff and players do a good job of taking responsibility for their play on the field.

Being an assistant has not changed the way he relates with his brother, and in ways has brought them closer together, Tucker said. “It allows us to bond over a unique interest we all share.”

Having success as a team is great to share with family, Tucker said, but being able to see his brother improve as a player has also been great.

“He’s grown up so much on the field and has become one of the best players in the country; as a brother that’s one of the most unique and special moments of this profession.”