Rallying from two different one-run deficits, the South Stanly baseball team earned a 5-2 home win Tuesday over the Hayesville Yellow Jackets in the first round of the state 1A baseball playoffs. 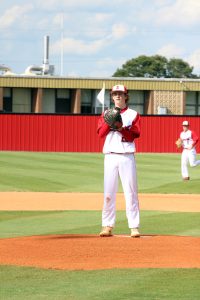 Sawyer Smith went the distance on the mound for the Bulls in Tuesday’s home win. Photo by Charles Curcio/staff

South senior Sawyer Smith threw exactly the limit of pitches allowed for one player in game, 105, to earn the complete-game win on the mound for the Bulls (15-9). He allowed one earned run on two hits with eight strikeouts.

Mabe Campbell tied the game in the bottom of the fourth with a solo home run.

The Bulls took the lead in the fifth with a run on an RBI groundout and scored twice in the bottom of the sixth.

South Stanly goes to the top seed in the West, East Surry Thursday at 6 p.m.