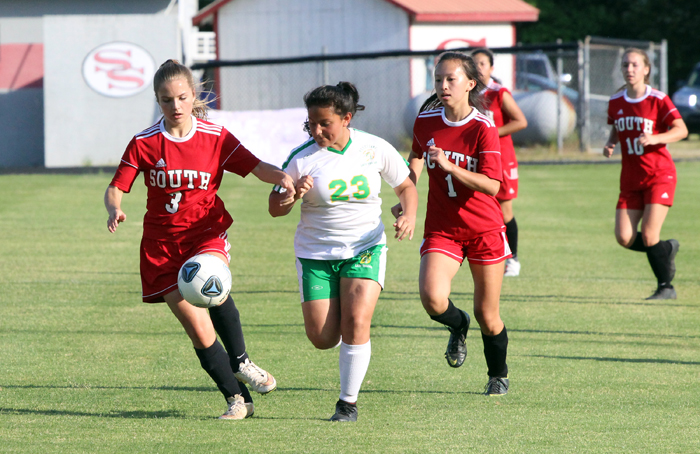 Hannah Crump (No. 3) and Star Lee battle for possession of the ball in the midfield Tuesday. (Photo by Charles Curcio/staff)

The Bulls, hosting the team’s first ever home playoff game in the sport in school history as the No.11 seed in the Western Region, fell to the Alleghany Trojans, 1-0.

Daisy Panuco scored the only goal of the game in the 54th minute with a header off of a corner kick for the No. 22 seeded Trojans (6-13).

The loss wraps up the most successful season for a South Stanly women’s soccer team finishing 13-5 overall and placing second in the Yadkin Valley Conference standings.

“We look at each other as family. We bond and tend to look after one another; that’s what made the difference,” Curlee said.

Curlee said the team moving forward wants to continue to show improvement and not be an easy win for the opposition.

“Years ago, when you came to South Stanly to play soccer, you thought it was an easy win. We want to see it keep moving up. When someone comes to South Stanly, they will expect a fight on their hands.”

Sports Editor Charles Curcio can be reached by email at charles.curcio @stanlynewspress.com, 704-983-1361 or via Twitter (@charles_curcio).