FROM NORWOOD TO THE NFL: Beane gives talk to South Stanly students 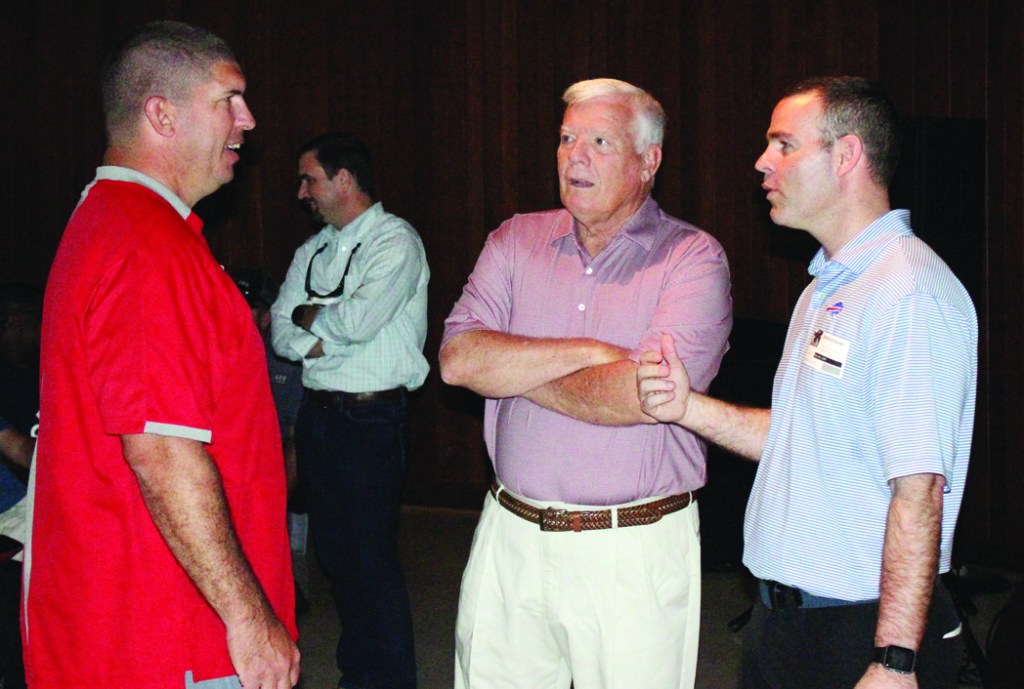 Having grown to the highest level of his profession in the front office of a professional franchise, Brandon Beane has never forgotten his roots.

A 1994 graduate of South Stanly High, Beane did not let naysayers or an apparent lack of opportunity stop him from becoming a general manager. After years of working his way up through the Carolina Panthers organization, Beane took over in 2017 as the GM of the Buffalo Bills.

On May 3, Beane returned to South Stanly to speak to the students about his career and the ideals which helped him garner the success he has enjoyed.

“I was sitting in the same seat you were 25 years ago, which is hard to believe,” Beane said.

He encouraged students in terms of their careers after high school to “think about the things you are passionate about and find a way to follow that. That will make you the happiest.”

Beane told those in attendance to not worry about the money or what someone else wants them to do in life, but follow their own passions.

Originally wanting to be a teacher and coach after a torn ACL the first game of his senior year in high school, Beane went to college at UNC Wilmington. While there after his junior year, he tried unsuccessfully to get a public relations internship with the Panthers and the NBA’s Charlotte Hornets.

One never knows, however, where the connection of getting in front of the right person will lead. In Beane’s case, it was his sister working tin the same building as John Rocco, who ran the Charlotte Touchdown Club.

Beane went to work for free with the club while living with his sister the summer after his senior year at college.

“If you’re passionate about something, don’t worry about the money,” Beane said.

Through that connection, he ended up working an event in which the person with whom he was trying to get an interview, Bruce Speight, was in attendance. Seeing Beane’s hard work at that event got him the interview to which he landed a six-week internship at training camp.

From that internship, however, Beane said he decided what he truly liked instead of the media side was football operations, handling the travel plans and various nuts and bolts operations of fielding a team.

He had to choose between a minimum wage position (at the time about $3.35 an hour) and a $30,000 position in a completely different field working for the Charlotte-based Sports Business Journal.

Beane said his wife “was looking at me sideways for that moment” when he decided in 1998 to join the Carolina Panthers.

He served as a football operations assistant, picking up players from the airport, helping with travel and working at the annual training camp at Wofford College.

Beane was promoted to to director of football operations in 2008, then started adding some scouting work as well to his regular duties, looking down the road to eventually becoming a general manager.

The Panthers’ fortunes started looking up in 2011 when the team drafted Cam Newton, Beane said. However, a 1-5 start in 2012 led to general manger Marty Hurney’s firing, which gave Beane concerns about his job as former Carolina owner Jerry Richardson called him into his office.

“He tells me exactly where to sit, which is exactly how Mr. Richardson is; everything is planned out. I sit and there is a piece of paper in front of me,” Beane said.

In big letters was simply the team’s overall record on the paper.

The owner told Beane of Hurney’s firing and then told the South Stanly grad he is the interm general manger of the Panthers at just 36 years old.

“You’re going to get things thrown at you and you have to prepare for it,” Beane advised the students.

He found out Hurney recommended him to Richardson, which showed what a good person Hurney was, “not worried about his family or himself during a down time.”

The Panthers went 6-4 the last 10 games of that season, but Beane did not get to remain as the Panthers’ general manager. An outside consultant, Ernie Accorsi, came in to advise Carolina on the hiring process for a GM. A former general manager with the New York Giants, Accorsi helped to interview potential candidates. The fourth person on that list, Dave Gettleman, was also a former Giants GM.

Gettleman got the position without Beane getting an interview, he said, an emotional moment in his life moving him to tears.

Beane said he told Gettleman he wanted his job, but “at the end of the day I’m here to support you. I know there are things I can help you with.”

As a scout mostly, Gettleman had not run a front office, which Beane said he knew he could help with in exchange for getting into the scouting world with which Gettleman was familiar.

Beane was named assistant general manager of the Panthers in 2015 when Carolina reached Super Bowl 50, losing to the Denver Broncos.

After the following season in which Carolina did not play as well, Beane’s name started popping up around the league for vacancies in general manager positions. He interviewed with the San Francisco 49ers but found out two weeks later he would not get the position. So he asked to get feedback on his interview to see what he could do to improve in that area.

Following the 2017 NFL Draft in April, Beane got a call from Buffalo head football coach Sean McDErmott, who said the team had just fired its general manager and he had recommended Beane’s name to the Buffalo front office.

He was offered the job, which at first “was the greatest thing in the world,” but after thinking about it, he realized the impact it would have on his family, who had lived in Carolina all of their lives.

“It was a crossroads in my journey because I knew talking to Mr. Richardson I would soon be GM of the Panthers…I had to step out of my comfort zone,” Beane said.

The Bills had not been to the playoffs at that point since 1999, one of the longest playoff droughts in NFL history for a team which appeared in four straight Super Bowls in the early 1990s.

“What would say more for my career, for what I can do, to either stay here in Carolina for a team that just came off the Super Bowl or to go try and start from literally the bottom and build a team up in Buffalo,” Beane said.

Despite his family not being initially happy about moving to Buffalo, Beane said it was the best move for himself and his family. When Buffalo made the playoffs his first season, it was just as fulfilling, he said, as taking the Bills to the playoffs.

Beane’s advice to the students, faculty and staff along with classmates from the Class of 1994 at South was “find out what you are passionate about and follow it.”

Reacting to Beane’s presentation, South Stanly athletic director Sean Whitley said, “His message of following your passion is something our students can really benefit from. I hope our athletes and the entire student body sees Brandon as an example that a small town doesn’t automatically equal a small life.”