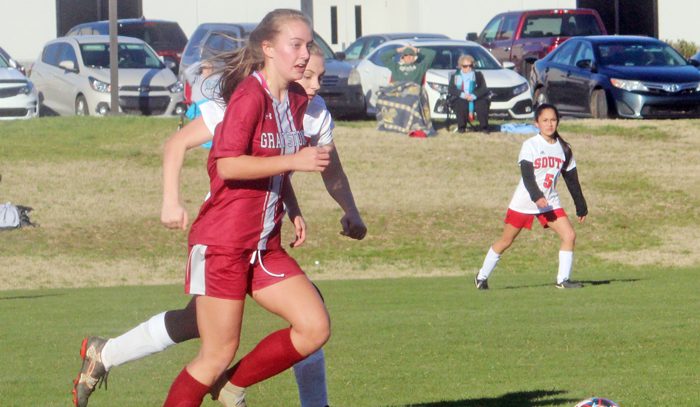 Sophomore Peyton Disser is the leader for the Knights this season in goals scored (27). (Photo by Charles Curcio)

Gray Stone was 16-0 this season in Yadkin Valley Conference making it five straight seasons of having won at least a share of the conference title with four outright crowns (2015, 2016, 2018 and 2019).

The Knights also extended its conference win streak to 37 straight games dating back to 2017, the last season the Knights lost a conference matchup. Since 2014, Gray Stone has gone 66-2-1 in conference games.

This season, Gray Stone has been seeded seventh in the 1A Western Region of the state playoffs, and recently advanced to the third round with a 4-1 win Thursday over No. Murphy in the second round.

Sophomore Morgan Trexler, the team’s leader this season in goals, led the Knights (17-6) with two goals while Cyan Vang and Anna-Grace Sumner each had goals. Peyton Disser and Natalie Garner each had assists in the win for Gray Stone, while senior Katie Leckonby got the win in goal for the Knights.

“This group has embraced the run our program has put together… they even hate giving up a goal in conference play.,” Wolfe said.

“Every game we find ways to challenge ourselves whether it’s a goal we set for a particular game, or by playing strong teams outside of the conference.”

Wolfe added the team “is a very competitive bunch. We try to create that environment, but there are times at practice that I have to remind them that they really are on the same team. They take it upon themselves to hold one another to a high standard, that we do things a certain way at Gray Stone, on the field and especially off of it.”

Regarding the team’s efforts in 2019, Sumner said “a lot of work has gone into our success this season,” Sumner said. “We practice almost everyday, even if it is indoors. Every player puts in a lot of work and always tries to do their best.”

Sumner added the team “gets along very well. we all love each other and act as a family. We treat each other with respect and are all really good friends.”

Leckoby, who has played nearly every position for the Knights this season, said her main role moving into the playoffs will be between the pipes. She said she directs the team “and makes sure they are doing what they need to be doing. I keep everyone organized to prevent the opposing team from scoring.”

The senior said the upperclassmen on the team “give advice (to the younger players) on how to handle certain classes as well as which ones they should take.”

Gray Stone looks to move forward in the playoffs traveling to No. 2 South Stokes (17-2) on Wednesday night. The Knights have twice reached the regional finals, the last time coming in 2017.

“We have proven that we can play with about anyone in the 1A level, but we have to work to earn that next step (in the playoffs),” Wolfe said. “As a program, we have many players contributing, with a good balance of young and old.”