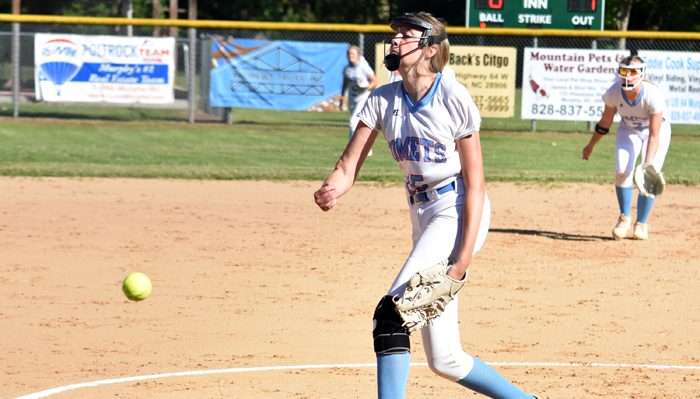 The No. 15 seeded North Stanly Comets softball team went on the road Tuesday night to the furthest western reaches of the state to face the No. 10 Murphy Bulldogs in the third round of the 1A state playoffs.

Senior pitcher Merris Talbert put in another strong effort on the mound for the Comets (16-6) in a 3-2 win. Going the distance, she allowed two earned runs on five hits with one walk and 14 strikeouts.

Taylor Ledford took the loss for the Bulldogs (16-3) striking out three.
Merris Talbert and Callie Parker had two hits each for the Comets. Both drove in runs along with Devyn Eury.

“It was nice to get so many girls contributing on offense,” North Stanly head coach Greg Speight said.

The long and winding playoff road for North continues Friday in the fourth round of the playoffs. With a trip to No. 3 Robbinsville (22-2), the Comets will have gone approximately 1,233 round-trip miles in three games, the approximate distance of a one-way trip from Albemarle to Austin, Texas. The Comets will also have spent around 21 hours, 34 minutes in transit.

The winner Friday plays either North Stokes or South Stanly in the best-of-three 1A Western Regional Series next week.

Sports Editor’s Note: Kevin Hensley of the Cherokee Scout contributed to this story.