North Stanly baseball falls in third round to Uwharrie Charter 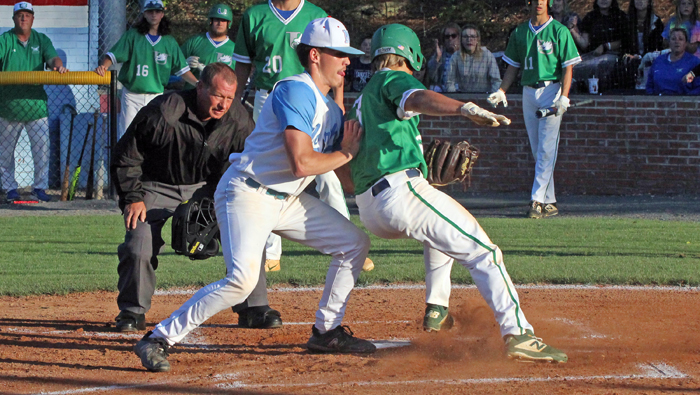 Carson Lowder tags a runner out in the top of the first inning. (Photo by Charles Curcio/staff)

North Stanly’s baseball season ended on Tuesday night in the third round of the 1A state playoffs to a familiar opponent from the regular season. After posting three wins over Uwharrie Charter, the Eagles jumped out to an early lead and never trailed in a 7-3 win over the Comets.

Carson Lowder started on the mound for the Comets and had a rough evening as four runs crossed the plate in his one inning. Two doubles and two fielding errors put North behind early in the game.

The Comets’ only runs of the game came with two on and two out in the bottom of the second. Cobb Russell reached first on a dropped third strike as the throw from the catcher flew into the corner in right field, allowing Russell, Cooper Hogan and Dylan Eudy to score.

Rhett Lowder pitched the final six innings for the Comets in relief, striking out seven and allowing no earned runs on five hits.

North had four hits in the game, including a double from senior Hunter Sells, one of nine seniors on this year’s Comets team.

Will Davis, head coach for the Comets, said “it was tough to start the game off” with going behind early, adding Carson “didn’t have his best” on the mound.

Davis said his team hit the ball and had chances, including the bases loaded in one inning before a diving catch by Uwharrie center fielder Colby Hammer ended the threat.

“A seeing-eye single would have changed everything. That’s a good team. We beat them three times already. Beating them a fourth time is a tough task,” Davis said.