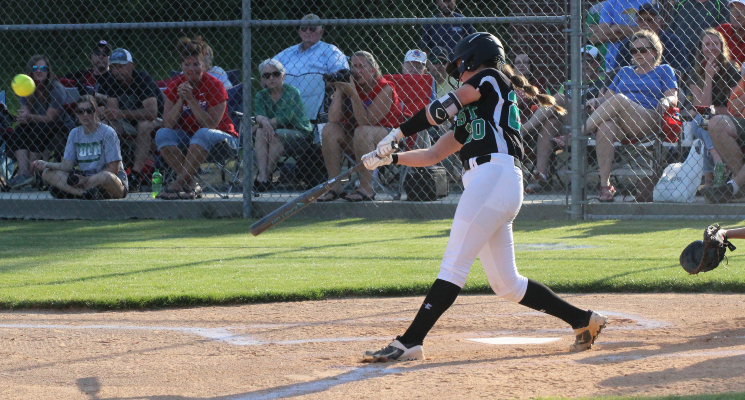 West Stanly's Shelby Barbee delivers her 13th home run of the season in the bottom of the first inning of Friday's game. (Photo by Charles Curcio)

After beating three other teams with West in their name, the state’s No. 1 ranked team, the West Stanly Colts, hosted the Madison Patriots Friday night in the fourth round of the state playoffs.

The Colts had not taken on the Patriots since the 2012 season when Madison took two out of three games in the 2A Western Regional Series.

The long ball made the difference for West Stanly along with the golden left arm of Jordan Hatch as the sophomore out dueled her counterpart on the mound for the Patriots in a 3-1 home win.

Hatch fanned 16 batters including the final batter of the game who represented the potential tying run. She allowed one earned run on one hit in the game, a solo home run from Ashley Hamlin in the top of the fourth.

The sophomore southpaw said she had to get used to the strike zone being called in the game, which is something one has to do every time in the circle.

“If (a certain spot) is where you like to throw and he’s not calling it, you have to adjust,” Hatch said.

“At the beginning, she was really inconsistent. I know if I stayed off her junk (pitches), she would get behind and then have to throw me a perfect strike,” Barbee said about the pitch which turned into her 13th home run of the season.

West added an insurance run in the bottom of the third inning with two outs. Ashley Hughes send a line drive into left field where Delana Chandler was unable to make the play. Hughes made it all the way to third base on the play and later scored on a wild pitch.

The other Madison baserunner in the game came on a two out walk drawn by Bailey Cantrell in the top of the seventh. The next batter struck out to end the game.

Hatch said she and others on the team “don’t want to let down” the seniors on the team, adding “we really want them to leave with a bang” in terms of pursuing a state title. She added the fourth round is the most “nerve wracking round of the playoffs” because of being a single elimination tournament at the point.

Colts head coach Craig Carter said the team had worked on defending the bunt in practice this week adding the corners “were crashing hard tonight.” She also said Hatch “knows where to throw the ball and take it away.”

Carter added “we have shaped up from the beginning to now to be something special. I knew we had it in us.”

He added he was proud of his team’s heart and determination when the offense team came through early, saying Barbee “is money” at the plate.

West will host the first game of the 2A Western Regional Series on Tuesday night at 7 p.m. against the No. 2 seeded Franklin Panthers who won Friday night over No. 3 North Davidson, 2-1.

Game Two of the series will be Thursday night in Franklin at 7, with a third game if necessary on Saturday back in Red Cross.