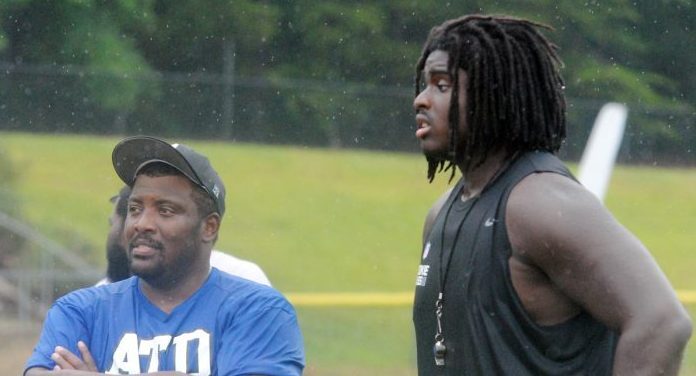 R.J. Prince (right) helped out last summer at a football camp in Albemarle. Prince signed on Thursday with the Baltimore Ravens. (File Photo)

On Thursday, Prince signed with the AFC North Division’s Baltimore Ravens after being let go last Sunday by the Pittsburgh Steelers. At noon on Wednesday, Prince flew into Baltimore to have a workout with the Ravens at 12 p.m. After receiving the results of a physical exam, Baltimore signed Prince to the 90-man roster.

“I’m glad (the Ravens) have given me an opportunity and I”m ready to get to work and prepare for OTAs,” Prince said via text referring to organized team activities.

Any kind of move in the NFL is difficult, Prince said, “especially when you don’t see it coming.” He noted his former teammates and coaches did not see it coming.

“However, that’s the business and the nature of the beast.”

Prince said this past week has been “a roller coaster of emotions. Having to say goodbye to the friends you’ve made over a year’s time is hard. Not having clarity as to why I was let go was very hard to stomach over the last few days.”

However, the staff with the Ravens “have been very welcoming. I’m already falling in love with the area.”

Baltimore and Pittsburgh are bitter divisional rivals, so moving over to a rival team is not easy. However, Prince said the move “just gets me more antsy to show Pittsburgh what they lost. Plus, I’ve always wanted to don purple.”