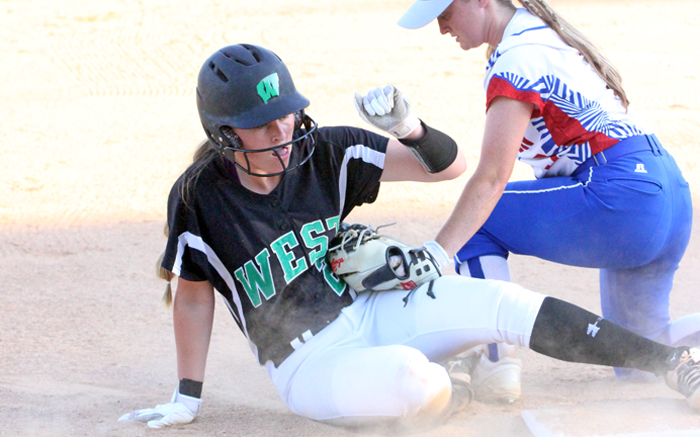 Shelby Barbee slides safely into third base against Madison. She leads the Colts with 13 home runs. (Photo by Charles Curcio/staff)

West Stanly’s softball opponents in the 2019 2A Western Regional Series are a team with pop at the plate and a different challenge in the circle.

The Franklin Panthers are 23-2 this season having won the Mountain 6 2A Conference title. Franklin’s only losses of the season came in a non-conference loss to Madison, 4-0, and an 8-3 home loss to Brevard in conference play.

The two regional opponents share Madison as a common for this season. The Panthers split two games with the Patriots while the Colts advanced to the series with a win over Madison on Friday.

The offense for Franklin revolves around the long ball. The Panthers have 36 home runs this season with two players, Hailey Freeman and Mackenzie Redoutey, hitting seven each. Eight of the team’s nine starters, according to first year Franklin head coach Bobby Bishop, have at least one home run this season.

Franklin also has seven players who have played in 25 games or more this season hitting .333 or above. Sophomore Taylor Ensley leads the Panthers with a .477 batting average, a .895 slugging percentage, 32 RBIs and 14 doubles along with six homers.

Hitting has been a focus this season, Bishop said, with a number of hours spent in indoor batting cages indoors due to rainy conditions which persisted much of the season.

Bishop said it will be a “big challenge” for the team to hit West starter Jordan Hatch. The sophomore has struck out 326 batters in 150 innings and has a 0.33 earned run average. Opposing batters this season have only had 48 hits in 515 at-bats for a .093 average at the plate.

“Are we able to adapt. I’m not saying that (the long ball) is the only way to score, but when you look at the numbers, that’s how we drove in runs.”

The Panthers reached the 2A state finals last season, losing to South Granville in the finals. Last season’s efforts, as well as returning eight of nine starters this season, has been motivation for the Panthers, according to Bishop.

“From the first day of practice to this point we have mentioned the phrase ‘unfinished business to take care of.’

Franklin senior pitcher Kellie Rogers is 16-1 with a 2.44 ERA allowing 47 earned runs in 135 innings and is more of a location and spin pitcher then power. Bishop said “looking at stats are great but they are not everything. You can’t measure a kid’s heart.”

The Franklin coach added the matchup “on paper is as close as you can get…whoever can adjust enough to get two to three runs, if that, will probably win.”

Game One of the series opens Tuesday at 7 p.m. in Red Cross. Franklin hosts the second game Thursday at 7 with a third game if necessary back at West Stanly on Saturday.