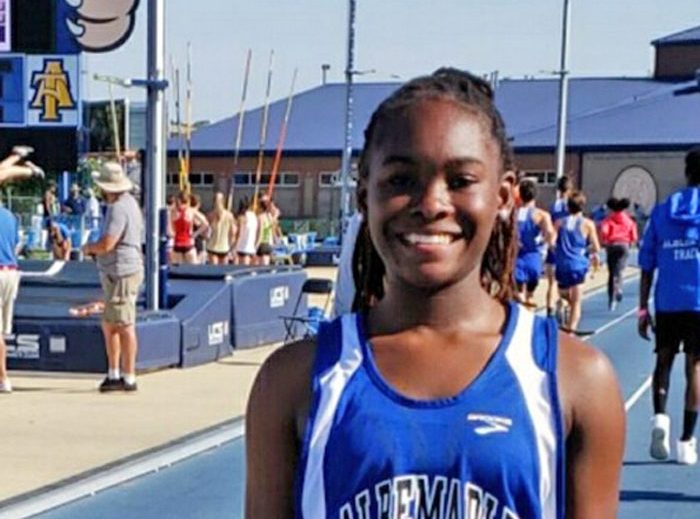 Somajhe Porter won the 1A state title in the 300-meter hurdles at this year’s state meet. Contributed)

A number of athletes from Stanly schools earned top finishes, with one earning a state championship.

Hurdling to a Title

For the third straight season, a female student-athlete from Albemarle earned a win in the 1A 300-meter intermediate hurdles.

Porter said she felt she was born to run the event, adding she “naturally knows how to jump hurdles and run.”

Porter ran the race some last season, finishing around the 49- to 52-second mark, but she improved her times this season. She worked a lot in practice with Josh Smith, who finished 13th in the 300-meter men’s race in 46.42 seconds.

Porter credited track coach Bernard Henry with pushing the team hard in practice, “which made the track meets easier.”

She said Henry told her she could be good.

“He always encouraged me and boosted my confidence.”

Porter, who also runs the 100- and 200-meter dashes along with being on the 4×100 meter relay team, said she would like to improve her times in those events and try to win a state title next season, along with defending her 300-meter title.

For North Stanly, Taegan Lowder finished fourth in the 400-meter run in 58.98 seconds.

Carlee Dixon placed 12th in the high jump for North at 4’6” while Chamar Watkins finished sixth in the men’s high jump at six feet.

Jitavis Huntley took second in the discus with a 148’ 2” effort, missing a state title by 1’6” to champion Matthew Swepson of Research Triangle. Huntley also placed fifth in the shot put in 46’ 9”.

West Stanly freshman Onii Bivens, who set several school records this season, was the lone representative for the Colt women’s team at the state finals. She placed 14th in the 400-meter run with a 1:02.09.

On the men’s side, West’s 4×800 meter relay team of Arturo Zelaya, Korbin McNeill, Noah Almond and Leo Martinez set a school record in finishing fifth with an 8:26.30.

Jordan Poole finished 11th in the preminaries of the 100-meter dash with an 11.35 but did not qualify for the finals.

Sam Hinson ran in the 110-meter hurdles for West finishing 16th in the qualifying round. His brother, Jake Hinson finished 13th in the 300-meter hurdles with a 43.53 seconds effort, with Sam running a 48.05 good for 15th in the event.

Senior Dalton Hatley finished ninth in the discus with a 142’ 8” throw.