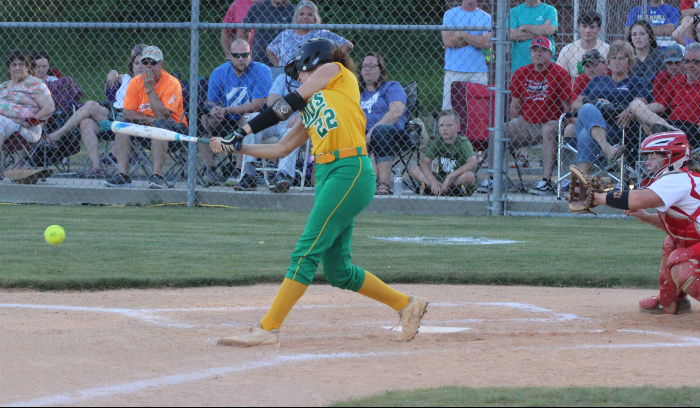 Rosalyn McRae had the walkoff hit in Tuesday's opening game of the 2A Western Regional Series. (Photo by Charles Curcio)

Rosalyn McRae delivered a walkoff RBI single with the bases loaded in the bottom of the eighth inning of Tuesday’s opening game in the 2A Western Regional Series for a 6-5 win in eight innings for West Stanly over Franklin.

The senior catcher had struggled to get hits in the game but sent the first pitch she saw on a ground ball between the shortstop and third baseman to score Meredith Harwood.

McRae said she changed her approach at the plate “because I was struggling the whole game.” She said she went up to bat in the eighth just trying to “put my bat out there and try to make contact. I’m not going to try and hit the ball hard.

Jordan Hatch got the win for West (25-0) despite allowing four earned runs on a season-high seven hits. Hatch struck out 11 in the game but walked six, the most for her in a game this season.

Kellie Rogers took the loss for Franklin (23-3), also allowing four earned runs on 13 hits with five walks and one strikeout.

West took its first lead in the top of the second with two runs. A single and error put runners on second and third with two outs. Megan Stockton then sent a ground ball into left field for a single, scoring Kailey Furr. Alex Stabler came home on a Harwood sacrifice fly to put the Colts up 2-0.

The long ball was the weapon of choice for both teams in the game. Trailing 2-0, a pair of two-run shots from Hailey Freeman and Sara Stanley put the Panthers in front for the visitors’ only lead of the game, 4-2.

West answered in the bottom of the fourth with three runs, led off by Furr who sent a fly ball down the left field line toward the foul pole. After a brief pause, the home plate umpire signaled home run. The three umpires got together to discuss the play and the call was upheld.

Stockton later singled in the fourth and moved to second on a Hatch sacrifice bunt. With two outs, Harwood worked the count to 2-2, then took the third one deep over the fence in right center field for an opposite-field two-run shot, putting the Colts up 5-4.

“I wasn’t trying to pull it because they told us she was going to throw outside,” Harwood said.

West squandered a scoring opportunity in the bottom of the fifth. With two on and one out, Alex Stabler was caught in a run down after a throw back from the catcher got past Rogers. Hatch then lined out to short to end the inning.

Franklin got doubles from Mackenzie Redoutey and Freeman in the top of the seventh to force extra innings. Freeman delivered her third RBI of the game with two out after Redoutey led off the inning with a double, tying the score 5-5.

Back-to-back singles by Harwood and Morgan Edwards put runners at second and third in the bottom of the eighth with no outs. After a fly out to left, Shelby Barbee was walked intentionally to load the bases for McRae, who delivered the walkoff win.

“It means a lot for any team to come back and win like that, especially since we haven’t really had hard competition so far. Facing them and getting down like that honestly is probably going to help us throughout the rest (of the playoffs),” McRae said.

Harwood, the designated player in the game hitting ninth, led the Colts with three RBI including her two-run shot in the fourth. Megan Stockton was 3-for-4 with an RBI, while Barbee, Edwards and Furr all had two hits each.

Saying the team worked on being patient at the plate, Harwood said her two-strike approach, putting the bat up as if to bunt then pulling it back to swing, “helped me time her up.”

She added winning in the fashion the Colts did Tuesday shows West’s mettle.

“We never give up. We always fight. It’s not a usual occasion we have to go into extra innings or have to come back, but we get the job done no matter what.”

Game 2 of the 2A Western Regional Series will be at 7 p.m. Thursday at Macon Middle School in Franklin. The Panthers must win Thursday in order to force a deciding third game, which would be Saturday night back in Red Cross.