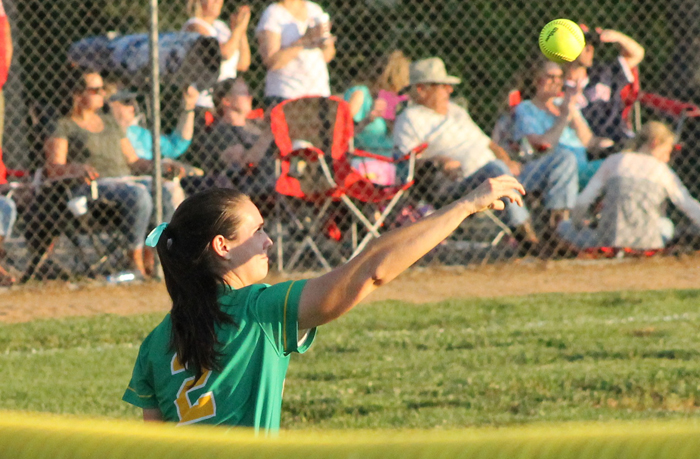 West Stanly right fielder Jordan Johnson follows through on a throw back to the infield in Thursday’s game. (Photo by Andy Scheidler/Franklin Press)

One word which could most closely describe the 2019 2A Western Regional Series between No. 1 West Stanly and No. 2 Franklin is controversy.

After Kailey Furr’s solo home run down the right-field line in Tuesday’s opening game was called fair, more controversy took place Thursday as the Colts suffered the team’s first loss of the season in Franklin in the second game of the best-of-three series, 2-1.

Trailing 2-1, West Stanly (25-1) appeared to have tied the game in the top of the fifth inning when Ashlyn Hughes sent a deep fly ball to Mackenzie Redoutey in center field. Meredith Harwood scored on the play but an appeal to third base reversed the play when umpires ruled Harwood left early on the tag up. 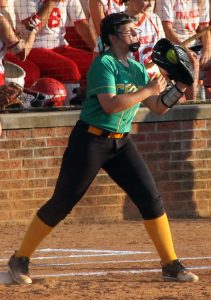 ­Ashlyn Hughes makes the play at first base in Game Two of the 2A West Region Series. (Photo by Andy Scheidler/Franklin Press )

Earlier in the top of the fifth, the Colts got on the board with a run. Megan Stockton singled to center but was thrown out on a fielder’s choice grounded into by Jordan Hatch. A courtesy runner, Karsyn Underwood came in for Hatch and reached third when Harwood doubled to left. Morgan Edwards then sent a ground ball to shortstop which went under the glove of Paige Norton scoring Underwood.

Norton put the Panthers (24-3) up 2-0 in the bottom of the first with a two-RBI double to right with one out.

Kellie Rogers scattered nine hits not allowing an earned run with one walk and one strikeout for Franklin earning the win in the circle.

Jordan Hatch took her first loss of the season in the circle for West, giving up two earned runs on six hits with one walk and a season-low four strikeouts. Hatch threw 74 pitches in the game.

Harwood had two hits in the game including a double while seven other West batters had hits. Furr and Alex Stabler had the other extra base hits in the game for West both delivering doubles.

Norton led the Franklin offense going 3 for 3 with two doubles while Taylor Ensley added a double.

“We are our own worst enemy at times and we’ve definitely got to get our energy level up and stay up the entire game.”

The third and deciding game of the 2A Western Regional Series will be Saturday at 3 p.m. in Red Cross. Carter said he knows Franklin “will come back and be prepared so we have to get back to work. It’s only one loss and it takes two to finish us off so we have to be prepared for Saturday.”

The winner will take on either Eastern Randolph or South Granville in next week’s state finals series Friday and Saturday.

Eastern Randolph rallied for a 9-8 win on Thursday in Game Two of the 2A Eastern Regional Series. Game Three of that series was scheduled for Friday night at South Granville.

Sports Editor Charles Curcio can be reached via email at charles.curcio@stanlynewspress .com, 704-983-1361 or via Twitter (@ charles_curcio).