The West Stanly softball team were all smiles after winning the team’s fourth-round matchup over Madison, propelling the Colts into the regional series. This weekend, the No. 1 seeded Colts take on the East’s No. 4 seeded Eastern Randolph Wildcats in the 2A finals series. (Photo by Charles Curcio)

On the sign outside West Stanly High, a two-word saying expresses an idea the Colts’ faithful have for the school’s softball team, which has qualified for the 2019 2A State Finals Series: no excuses.

West looks to finish the season in that fashion as the team heads to the series at the UNC-Greensboro softball stadium for a 7:30 p.m. Friday start to take on Eastern Randolph (https://www.thesnaponline.com/2019/05/29/east-meets-west-eastern-randolph-awaits-colts-in-2a-state-finals/). The Colts have won 26 out of 27 games this season, seeing a 25-game win streak end in Game Two of last weekend’s Western Regional Series to No. 2 Franklin.

West bounced back and shut down the Panthers in Saturday’s deciding third game to win the regional title.

West’s success this season has come in no small part to the team’s ability to limit opposing offenses.

The first line of defense for that is the sophomore standing in the pitching circle, Jordan Hatch.

Verbally committed to Duke, Hatch’s numbers are impressive. In 170 innings, she has allowed only 13 earned runs (21 overall) for a 0.53 earned-run average. She has allowed 71 hits in 592 at-bats, giving opposing batters a .120 overall average against her. Hatch has also pitched 16 shutouts and has won all 26 of the team’s games.

Then there are the strikeouts, which have come early and often for her. Hatch has fanned 348 batters this season, averaging 12.9 strikeouts per game. Those numbers place her unofficially 23rd in the history of NCHSAA fast-pitch softball for strikeouts in a season. With 33 walks issued, Hatch has a 10.55 strikeouts-to-walk ratio.

As a team, West has outscored teams 191 to 24 this season and has been the No. 1 ranked 2A team in the state for much of the season, according to MaxPreps. The Colts have also been ranked No. 1 in the state regardless of classification on several occasions, including currently. West Stanly is ranked 33rd in the country.

West head coach Craig Carter said the Colts have faced a number of teams all season like Eastern Randolph who can hit the ball. He said stats are important, but said if Hatch “is throwing the right pitches in there, I think we can do better.”

Carter talked about Hatch’s ability to adjust her pitching tactics using Franklin as an example. The Panthers went from scoring four runs on seven hits drawing six walks in the first game to two runs on nine hits with two walks and 11 strikeouts over the next two games.

“We were throwing more inside even in the second game and it threw their bats off. As long as we are adjusting, I think we can adapt,” he said.

When asked about the matchup with Eastern Randolph, he said “quite frankly, I think we ought to win. You have to show up and be mentally prepared to play.” 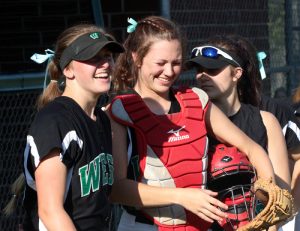 From left, Shelby Barbee, Rosalyn McRae and Kailey Furr share a lighthearted moment before a playoff game this season. (Photo by Charles Curcio)

He does not want his team to be content with reaching the state finals and just “be happy that they got here.”

Carter said he felt good about the team’s offense this season as well.

Eight Colts have at least one homer while four (Shelby Barbee, Rosalyn McRae, Megan Stockton and Meredith Harwood) have five or more home runs on the year.

“It makes you feel good that potentially you don’t have a hole in your lineup…all of them have contributed. I have told them if they are struggling at the plate, go play great defense,” Carter said.

“(The loss to Franklin) quite frankly grounded a few of them and made them realize they can lose,” Carter said. “No matter how good you are, they’re always somebody ready to knock you off. I can assure you Eastern Randolph is going to show up ready to play.”

Reaching the state finals “is a once in a lifetime opportunity. I told the girls that I want them to enjoy the moment, savor the moment but be focused in the moment.”