As her teammates from last season travel to Greensboro to vie for a state championship, former West Stanly standout Payton Whitley continued her career this spring as a freshman at Belmont Abbey College. 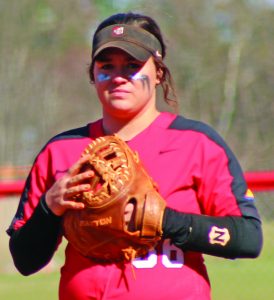 Whitley played in 39 games for the Crusaders this season, leading the team with 13 home runs and 34 RBIs and a .775 slugging mark. She batted .340 for the season posting a .421 on-base percentage.

The college freshman said “It means a lot to represent West Stanly at the next level, and to prove what kind of talent can come from our small county.”

Leading the conference in home runs as a freshman along with her team-best marks were big accomplishments, she added.

“My coaches and I were constantly working on my swing, and just working on myself as a hitter overall helped me reach this accomplishment,” Whitley said.

This season, Belmont Abbey finished seventh in the 11-team conference (10-10) and a 21-22 overall record, but Whitley said she sees a lot coming from her team in the future.

“We all have our minds set on the same goal and we are determined to reach it. I believe that we will go far next season,” Whitley said.

Whitley also received the Most Outstanding Female Freshman Award while also making the dean’s list with a 4.3 grade-point average. Her academic plans are to graduate in 2022 with a degree in psychology.