Game Two of the 2A softball series goes to Eastern Randolph, 3-0 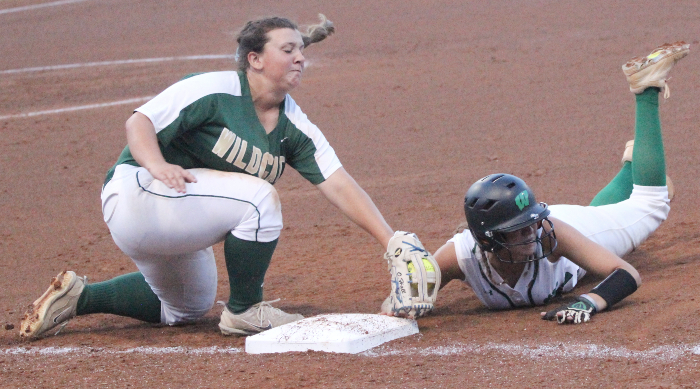 West Stanly's Rosalyn McRae dives under a tag attempt at first base in Saturday's second game of the 2A state series. (Photo by Charles Curcio)

The second game of the NCHSAA 2A softball state finals series between West Stanly and Eastern Randolph saw the home-standing Wildcats become the first team in 2019 to shut down the Colts offense, 3-0.

Sophomore left hurler Savannah Beaver threw a complete-game two-hit shutout for the Wildcats (25-6) walking one and striking out seven.

West Stanly struggled in the second game to get the ball out of the infield. Only one out in the game by the Colts reached the grass, the others coming on ground outs and strikeouts.

Eastern Randolph scored its first run of the series in the bottom of the first inning. A leadoff walk to Courtnee Carter and a sacrifice bunt brought Beaver up with two outs. She send a ground ball to short where Morgan Edwards threw low to first base, putting Beaver on with a single and allowing Carter to score on the play.

Carter helped generate another run in the bottom of the third, leading off with a double then later scoring on a fielder’s choice putting the Wildcats up, 2-0.

West’s best offensive chance came in the top of the fourth inning. With one out, singles from Shelby Barbee and Rosalyn McRae along with a walk to Kailey Furr loaded the bases. The next batter, Alex Stabler sent a line drive to right fielder Leighanna Ward who caught the line drive and threw behind Furr at first base doubling her off the bag.

“From my vantage point, it looked like they got her..that’s a byproduct of some bad baserunning. We have to be more fundamentally sound,” West head coach Craig Carter said.

Eastern added a insurance run on a sacrifice fly in the fifth from Kasey Craven.

“In the first game, we didn’t capitalize when we should have at the plate. In this game, we did,” Eastern head coach LaVette Graham said. “We played unselfish ball tonight.”

Graham added the team’s game plan did not change but the Wildcats committed to it in the second game.

“It’s less me and more we,” Graham said.

Regarding the Colts’ offensive struggles, Carter said West has to “make better adjustments at the plate to hit that pitcher…we have to stay united and keep fighting. It’s been a long season and it comes done to one final game.”

The deciding third game of the series will be 4 p.m. on Sunday afternoon at UNC-Greensboro’s softball stadium.

“I believe in these girls and I love them. I really believe they’re going to come back and do well. I think they will be ready,” Carter said.