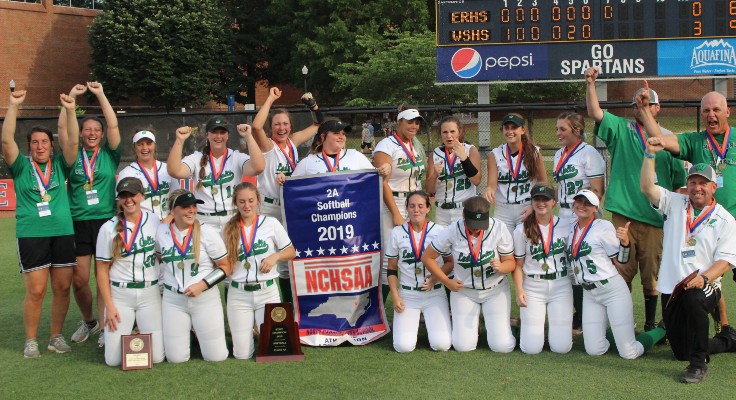 The number-one ranked softball team in the state regardless of classification, the West Stanly Colts, saw the fate of the team’s entire 2019 season come down to one final game Sunday.

After suffering just the team’s second loss of the season late Saturday night in the second game of the best-of-three 2A state finals series, the Colts’s group cheer after Sunday’s game punctuated the result of the game.

West jumped out to the early lead and never trailed, taking the deciding third game of the series 3-0 to win the 2A state title, the school’s third softball state championship and first since 2013.

Jordan Hatch earned her 28th win of the season Sunday for West (28-2) scattering six hits for the complete-game shutout, striking out six batters.

State finals Most Valuable Player Shelby Barbee provided the heroics in the first game with a ninth-inning walk off hit then added two vital insurance runs with a two-run home run in the fifth inning.

“It was the first pitch and I just put in my mind I was going to drive the pitch down her throat,” Barbee said.

The sophomore added the team took advantage of being more aggressive at the plate in Game Three rather then Game two, adding “aggressiveness brings success.”

“We took a different approach at the plate,” Carter said, noting his team moved back in the batters box to force Beaver to throw her drop pitch over the plate instead of on the outside.

“I can’t help but think the girls listened,” he added, noting the nine hits in the game.

Defense also was solid for the Colts. One critical early play came in the top of the first inning, giving the Colts momentum. Alex Stabler’s diving catch in left to end the frame and prevent a run from scoring kept the Wildcats off the board.

West’s offense gave Hatch early run support got off in the first inning. As she had in the ninth inning in Game 1, Morgan Edwards led off with a double and reached third on a groundout. Rosalyn McRae then drove a hard grounder deep into the hole at short where the shortstop was unable to make the play, scoring Edwards.

The Colts’ defense came up solid in the top of the third. With a leadoff hit and stolen base, a fielder’s choice on a bunt attempt from Courtnee Carter got to Hatch, who through to Barbee at third to get the lead runner. Carter eventually made it around to third but the inning ended on a fly out to Stabler in left.

West appeared to have added a run in the third inning. Edwards singled and reached third on a Shelby Barbee single. As Edwards tried to stand up, the ball got away from Wildcats third baseman Gerilyn Milligan at third base and Edwards attempted to advance. Initially, Edwards was awarded home on obstruction but the umpires conferred and reversed their call. Neither runner scored as the next batter popped out to end the inning.

Eastern Randolph got two runners on in both the fourth and fifth innings but the runners did not score. The Wildcats would strand eight runners in the game.

West extended its lead with two swings of the bat in the bottom of the fifth. Edwards got her second hit of the game then Barbee one batter later crushed the first pitch she saw in the at-bat well over the fence in left-center field, putting the Colts up 3-0.

In the sixth, Kesley Craven nearly answered for the Wildcats but her fly ball to center field was short by inches of going out.

Poetically, Hatch ended the game with her 364th strikeout of the season in a 1-2-3 final inning to give the Colts the crown.

“I never thought I’d ever experience (winning a title). As a coach you want it so bad that you can almost taste it. When it becomes a reality, it becomes surreal,” Carter said.