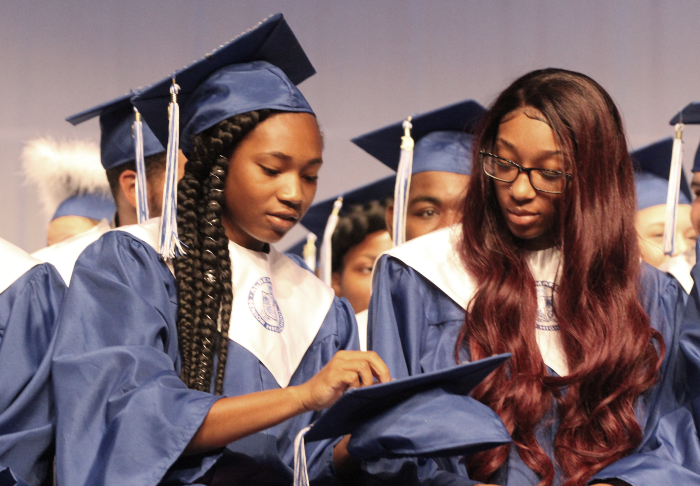 A total of 104 graduates from Albemarle High School’s Class of 2019 walked across the stage Saturday afternoon at the Stanly County Agri-Civic Center and received diplomas.

“We are the most diverse school in this county, but we are also the most disadvantaged,” Pinto-Dimeglio said, adding he and his classmates have had to persevere through challenges for the last four years.

“Albemarle does not make quitters. An Albemarle student knows how to make what they need to out of what little they are given. That’s not something you can say about every other school in the county.”

The senior spoke about “the culture of Albemarle,” saying it involves “doing what needs to be done. That is to push through whatever stands before you.”

Pinto-Dimeglio said he and his classmates have watched “teachers taken from our halls” and “coaches taken from our sports. And as administrators were changing and leaving, yet we as students continued on. We took hold of our learning; we self-coached our sports or we carried our talents to outside teams just to continue our passions.”

He said he had “no reservation” in saying the Class of 2019 was the strongest graduating class in the school’s history.

Emma Freeman followed with the commencement speech, mentioning that for most of the Class of 2019, it had been roughly 4,687 days ago when they had first gone to school in kindergarten.

“It was an emotional day for all of us. You, our parents and families, left the parking lot either in tears that your baby was growing up or left jumping up and down because thank goodness you didn’t have to hear us crying or begging for candy until we got home,” Freeman said.

Going to middle school “was a little scary,” she admitted, but said they “were forced to step out of our comfort zones and into the place where we would learn to accept our awkward phases.”

Middle school was where she said she and her classmates figured out which sports they liked, which subjects they were good and not so good at along with discovering “our education was pretty important.”

She and her classmates were excited but nervous going into high school, Freeman said, but noted she “found it incredible how far we’ve come from timid freshmen to confident, fearless seniors.”

“Thank you, Albemarle High School, for giving me something so good that makes saying goodbye so hard.”

As he had earlier in the day, SCS superintendent Dr. Jeff James said each school has its own culture, adding he was honored to be able to meet with some of the students as part of the Student Advisory Board which meets quarterly.

“It’s probably one of the best parts of my job is talking to students because that’s who matter,” James said.

He referred to the Albemarle group as being vocal.

“They always had Albemarle High School at the base of their decisions and definitely want to change any negative perceptions that exist about the school.”

James also said the AHS campus was “probably one of the prettiest campuses we have as far as high schools.”

He said he felt a kinship with Albemarle having started his career “in an inner-city school” in Statesville.

“I hold this school a little near and dear to my heart, James said.

He noted the accomplishments of the Albemarle High Class of 2019 which included one senior scoring a seven on an ACT WorkKeys exam, the highest score, along with several platinum certificates earned in the technical side of education.