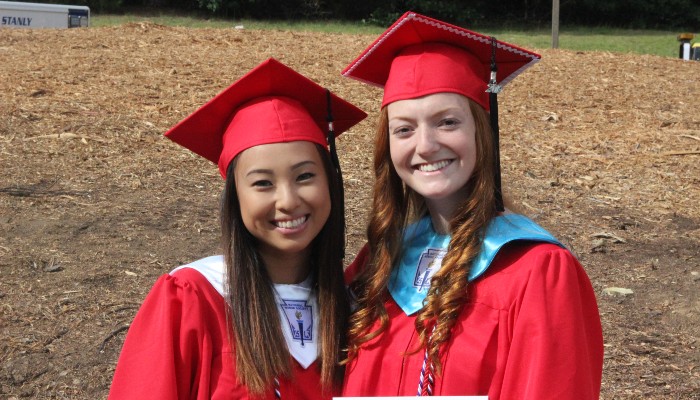 Graduating the highest number of students in the 56-year history of the school, South Stanly graduated 158 students from the Class of 2019 at commencement exercises on Saturday evening at the Stanly County Agri-Civic Center.

Taryn Tucker, South Stanly student body president, said she and her classmates were freshman not long ago looking “at the big scary seniors with admiration, not realizing how soon we actually would be in their place.”

She added she measured time not in years but “in friendships and the time I’ve been blessed to spend with each and every one of you.”

After being introduced by Alexis Faulkner, Stanly County Schools Superintendent Dr. Jeff James gave the commencement address. He started by saying his “roots began in the K-12 education. If it wasn’t for the right public education and schools we have throughout the nation, I’m not sure I’d be standing here today.”

James’ theme for his comments at all of Saturday’s three commencement events at the Agri-Civic Center included comments about the culture of the schools from his contact with students through the student advisory groups.

In the case of South Stanly, James said he found South’s representatives as being “probably the most compassionate and loving group of students I think I’ve run across.” He also joked the group from South loved Bosco sticks so those were on the menu at South once a month.

Faulkner then introduced whom she called her best friend, Star Lee, to give the student address. Lee played volleyball and soccer for South and belonged to several school clubs including National Honor Society, the art club and student club. Lee will attend East Carolina University in the fall to study biology.

Lee called the day “an exciting time” but added Saturday was “also a bittersweet day,” bitter for leaving the friends, family and teachers, but sweet in starting a new beginning.

“It’s a time to leave high school in the past and start a new journey,” Lee said.

She admitted to being “terrified because in my head I’m thinking there are so many possibilities I can do with my life from here on out…I’m scared I won’t get to where I want to go.”

Lee responded to her fears by quoting author Mandy Hale who said “It’s OK to be scared. Being scared means you’re about to do something really, really brave.”

She also said she was sad about leaving South but said to her classmates, “Look at where we were at. We made it. We’re all here because we never gave up.”