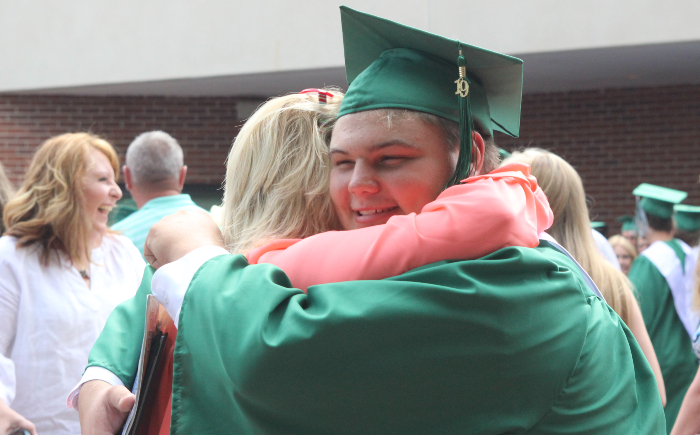 In her opening greeting to the West Stanly High School Class of 2019 during commencement exercises, Cristina Sells said one word which described the class was “passion.”

“The Class of 2019 is passionate in whatever discipline they may pursue, whether that passion is on a field, on a course, on the track or on a court,” Sells said.

Graham Tucker, son of West Stanly drama teacher Wes Tucker, spoke briefly to the audience about he and his classmates, saying his class “marks the end of an era, an era of love, loss, friendship and memories.”

Getting chuckles from the crowd for mentioning prom and “how shockingly well it turned out this year,” along with singing announcements from a couple of years ago, Tucker shared some of his experiences in school.

Mentioning his father’s 22 years of teaching at West, Graham said he was “ingrained in the lifestyle,” spending many an evening in the green seats in the auditorium while the West Stanly Players rehearsed.

When he reached high school, Tucker said he “had a pretty good idea of where I wanted my life to go and the friends whom I wanted to keep by my side.”

Four years later, those ideas changed on career and friends, but speaking to the class, he said each member had an impact on his life, “from making me laugh to being a shoulder to cry on to evolving from a best friend to something more.”

He ended by saying he hoped in 10 years at a reunion he could sit down with his classmates “and talk about how happy we are. Because isn’t that what life is all about?”

Gretchen Castelloe, another speaker for the class, thanked the teachers and staff at West “for doing your very best to run a school in the midst of our chaos.”

Saying her classmates know her as the girl “who raises her hand in the middle of class to ask a million questions,” she said her class was accomplished by saying “50 perecnt of the boys in the class have not had a haircut since the sixth grade.”

She shared stories of teachers in cat T-shirts and a hall pass to go to the bathroom which was literally a toilet seat.

“Listen, guys, if we could finish ‘The Scarlet Letter,’ we can do anything,” Castelloe said.

She ended by saying young adults are often “consumed by the desire to fulfill the expectations that they create for themselves…be happy, be successful. Make others remember you. Do not let anything stand in the way of you reaching your dreams.

“Your future is in your hands,” she added. “We only get one shot at life. So make the most of it.”

Superintendent Dr. Jeff James asked students to stay in touch with each other by calling on the phone instead of relying on social media platforms.

“There are so many facets to the wonderful memories you’ve collected. Treasure them all and have regular and meaningful conversations,” James said.

James noted the more than $6 million in scholarship money earned by the students in the Class of 2019.

“With the knowledge you’ve gained in school, the guidance of your family and the wonderful friendships you have made, I am confident you will find success and happiness.”