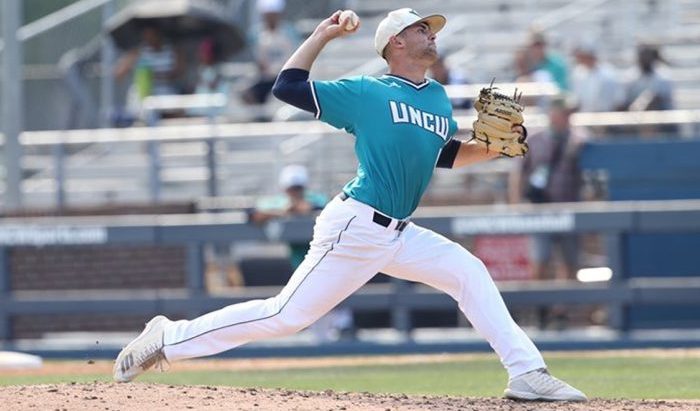 Former Albemarle Bulldog baseball standout Justin Crump was drafted by the San Francisco Giants in the 30th round in the 2019 MLB draft. Crump signed with the Giants on Sunday. (Contributed Photo)

He has not worn the royal blue of Albemarle High School since the 2014 season and has gone through a myriad of health issues while playing baseball in college.

Showing his determination and perseverance to play at the next level, however, Justin Crump’s efforts were recently rewarded.

The former Bulldog and UNC-Wilmington Seahawk pitcher was drafted by the San Francisco Giants in the 2019 Major League Baseball Draft in the 30th round.

Crump said he “was surprised that they called my name that early. I was expecting to be a late draft pick with my age and everything going on” referring to his elbow struggles.

In high school, Crump played four seasons for the Bulldogs earning All-State honors in his senior season in 2014.

After two solid seasons for the Seahawks, including eight starts his sophomore season, elbow problems started to slow Crump’s progress.

“I never had any (elbow) problems in high school,” Crump said noting his problems began in college as his fastball’s velocity increased.

He redshirted both his sophomore and junior seasons after going through ulnar nerve repositioning and Tommy John surgery, reconstructing the ligament in his right elbow.

Crump ended up playing three seasons, including 20 relief appearances this past season striking out 34 batters in 20.2 innings.

“It was definitely rougher on my mental side of the game more than anything,” Crump said.

“It was a rough two years but God blessed me with an opportunity to come back after two injuries to come back and play the game I love.”

Crump credits his parents, Brian and Christina Crump, for raising him to “never give up on a dream to play pro baseball.”

The new Giant said his mother being sick from autoimmune diseases scleroderma and MCTD drove him “to go forward to make her proud so eventually I can repay them for all the sacrifice (they made), to give them a better life.

Crump added his goal is “to make a name for myself, for my family and go from there…it was a true blessing to get the phone call.”