PWX’s The Syndicate to host wrestling event at Stanly Fairgrounds 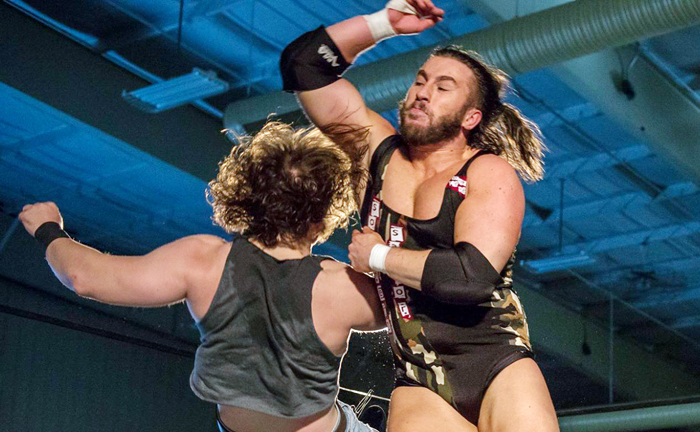 John Skyler, pictured delivering an elbow to an opponent, will team with Ethan Case to challenge for the PWX tag team titles Saturday. (Courtesy of John Moses Photography)

Charlotte-based independent wrestling promotion Premiere Wrestling Xperience, along with one of its factions, The Syndicate, will present the “We Deserve It” event 7 p.m. Saturday at the Stanly County Fairgrounds.

General admission tickets are $10 for adults and $5 for children 12 and under.

Former co-holder of the WWE Tag Team Championship and Hall of Famer Billy Gunn will be in action, along with two PWX title matches.

The main event features the Syndicate’s Elijah Evans, the former PWX heavyweight champion, going up against the man who unseated him for the belt, current title holder Slim J.

In another title matchup, Revolt, made up of Zane Riley and Caley Konley, will defend the PWX tag team championship against No. 1 contenders John Skyler and Ethan Case.

Several other matches have been scheduled including a women’s matchup between former Mae Young Classic competitor Aerial Monroe and the Syndicate’s Savannah Evans, along with a handicap match when Harlem Bravado takes on two Syndicate members, Montana Black and T.J. Boss, a tag team also known as G.R.I.T.

PWX owner Brian Kanabroski said Saturday’s show will be a family-friendly event for fans of all ages. He said the company “has grown leaps and bounds,” noting more than 6,000 people per week visit the promotion’s website.

Kanabroski said fans “will get a full-on production NXT/WWE style product for 10 bucks…there’s going to be something you’re going to like in the show, something memorable.”

The owner said he “is trying to grow the company” and PWX has relationships with bigger companies like World Wrestling Entertainment, TNA Impact and New Japan Pro Wrestling.

He noted there is a boom in the wrestling market in terms of independent organizations with the amount of talent with whom companies can utilize.

Kanabroski said he is committed to having shows in smaller towns such as Albemarle, Hickory and Shelby.

David Diggs, owner of Diggs Fishing and Hunting in Norwood, is the event’s sponsor.

A former pro wrestler, Diggs said Saturday’s event “will be extraordinarily big for the county…I wanted (to sponsor the event) because it’s really professionally done.”

Sports Editor Charles Curcio can be reached at charles.curcio@ stanlynewspress.com, 704-983-1361 or via Twitter (@charles_cur cio).