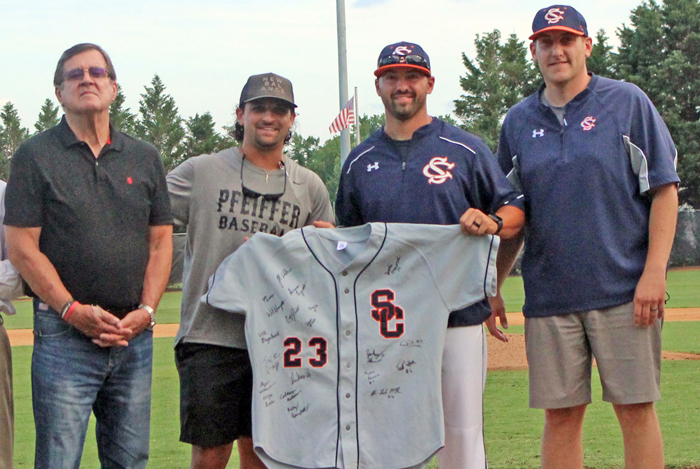 A jersey signed by the members of the 2019 Stanly County Post 76 American Legion baseball team, the first to play at Pfeiffer on Joe Ferebee Field, was displayed Wednesday night. (Photo by Charles Curcio)

His name is synonymous with American Legion baseball throughout North Carolina. It resides on the rolls of eight halls of fame for his accomplishments.

Before Wednesday’s American Legion baseball game at Pfeiffer University, Joe Ferebee, former Falcons head coach along with the Legion teams of Stanly and Rowan counties, was honored as a part of Joe Ferebee Night.

A number of former players and colleagues were recognized in a pregame ceremony before the game between the Stanly Post 76 squad and visiting Rowan Post 342.

The 2019 season is the first for Post 76 playing at the Pfeiffer University baseball field named in Ferebee’s honor, informally known as “The Joe.”

Jack Ingram, a long-tenured softball coach and professor at Pfeiffer, said “any time we can honor Coach Ferebee I want to be part of it. He meant so much to Pfeiffer.”

Ingram, also a Pfeiffer alumnus, played basketball for the Falcons, but Ferebee tried to get him to play baseball as well.

“It was probably one of the mistakes I made,” Ingram said about not playing for the coach.

Having an office next to Ferebee for around 15 years, Ingram said “seeing the man working every day. What an innovator he was. He never demanded, but he always commanded.”

One of the reasons for Ferebee’s success, Ingram said, was no one could outwork him.

“You could never beat him to the field. You would always see his silhouette (on the field) whenever the sun went down,” Ingram said of Ferebee in the days before any of the Pfeiffer fields had lights.

Dale Ijames, a scout for the Kansas City Royals, spoke of playing against Ferebee’s teams when he pitched for Kernersville.

“His reputation is second to none,” Ijames said.

Ijames said Ferebee meant a lot to his daughter Dacia, a member of the Pfeiffer Sports Hall of Fame for softball.

Even when it was cold, Ferebee rarely missed games, Ijames said. His presence was “motivation he carried not only to his baseball players, but to the school and everybody in the whole state.”

Ijames said Ferebee’s teams “played the game the way it was meant to be played.”

The game featured the two top teams in Area III’s Southern Division this season in terms of overall wins.