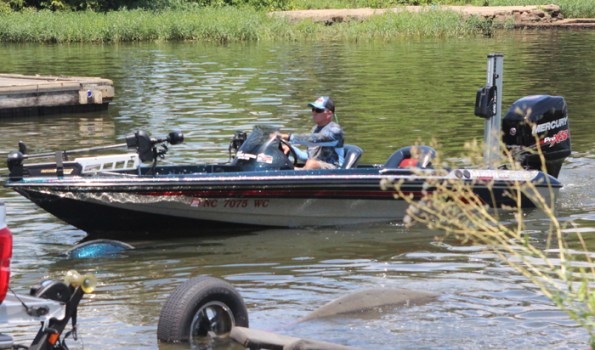 Below, Mike Davis drives the boat for the team finishing second. (Photo by Charles Curcio) 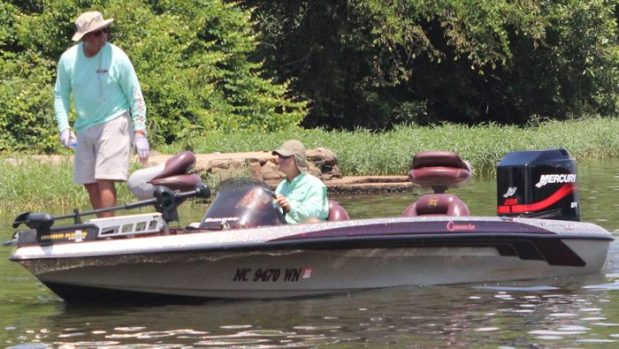 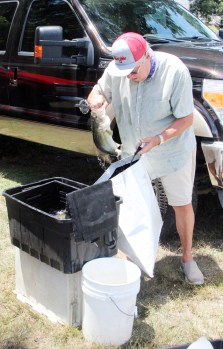 Zack Davis and Mitch Burgin puts his catch in a bag in order to move fish back in the lake. (Photo by Charles Curcio) 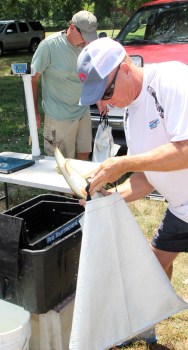 Mitch Burgin puts a fish back into the bag to take back to the lake.

On a weekly basis at boat landings in Stanly County, large number of pickup trucks with trailers can be found parked as fisherman of all ages take to the lakes.

One series of open bass fishing tournaments at Badin and Tuckertown lakes have drawn people from hours away to Stanly to compete and win.

Bo Russell’s Open Bass Tournament Series opened in March and will run through October allowing all fishers to compete for prizes and bragging rights.

Tournaments take place three days a week (Tuesday, Thursday and Saturday) and launch from three different places, including the Alcoa launch in Badin, the Flat Creek launch on Tuckertown Lake and on Lake Tillery at Swift Island off of N.C. Hwy. 24-27.

Times of the events vary to allow those working to fish as well as some events more readily available for retired fishing fans.

Conservation of wildlife is the name of the game at the events, Russell said, noting in his events, the teams of two fisherman keep three fish, not five like others. Also, the limit is three per boat, not per contestant.

“Everybody can catch their limit; everybody has fun,” Russell said.

“We don’t kill off the resource. If we don’t have any fish, we will not have anything to fish for,” Russell said.

He noted some club tournaments at the lakes will have large amounts of dead fish lying around the ground. Should any of the fish die at one of Russell’s events, which occasionally one or two may, Russell said he will give those fish to people whom he knows will eat them.

“They’re not wasted. We don’t throw them back in the water and let turtles eat them,” Russell said.

Russell said the fishing community in Stanly is active with a “good group of people coming up that they buy these great big $75,000 boats and $60,000 trucks…they really like it.

Bragging rights are“ all this is” Russell said about his events, which cost as little as $25 to enter.

“If you win, you win your gas money…(winners) can see their picture on (social media) for a week and brag to their buddies.”

One participant drove two hours from Vass to Badin to fish in the event, Manny Lenau, saying he loves the competition.

“You try to get better at something that’s your hobby,” Lenau said adding the drive over to Badin was “a good change of scenery.”

One participant, Mitch Burgin from Lincolnton, said Badin “has a better caliber of fish. Every cast you can catch a six-pounder. Not many lakes can say that.”

He said Russell’s tournaments are “well organized” and said “all these people are good people. No problems, no drama. Best man wins.”

More information on the Russell tournaments can be found online at www.russellsbasstournaments.webstarts.com.