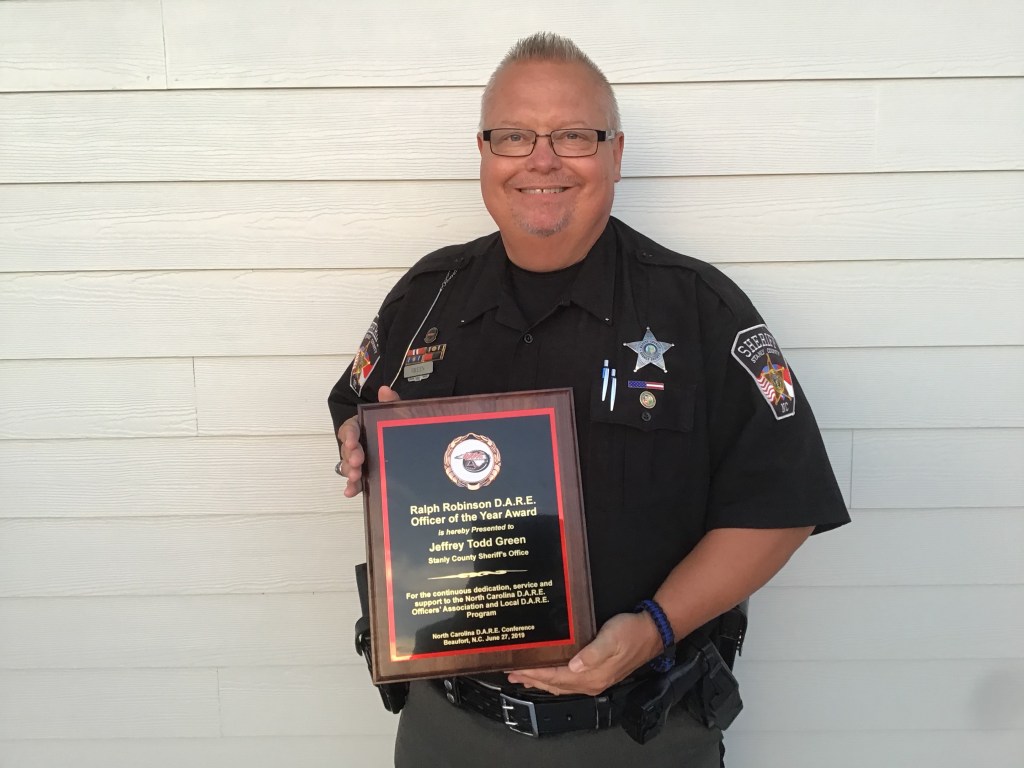 Todd Green has been named N.C. DARE Officer of the Year.

Green, who has been a D.A.R.E. officer since 2000, also serves on the North Carolina D.A.R.E. board as first vice president.

“I was shocked,” Green said. “I did not know this was going to happen. They surprised me.”

In 1983, the D.A.R.E. program was created in Los Angeles in an effort to educate students about the dangers of drugs. Since then, the program has expanded to more than 50 countries.

Through the program, police are invited by local school districts to speak with students about the dangers of drugs. The program usually lasts about 10 weeks. After students have completed the program, they are asked to sign a pledge stating they will not use illegal drugs.

The D.A.R.E. program has undergone numerous changes since its beginning. New statistics about opioids have been added, and more of the lessons are delivered online. A mobile app was also created so students can access lessons on-the-go.

“There’s just a whole lot more work that connects with the kids in the classroom,” Green said.

Before he took on the role of D.A.R.E. officer, Green was a police officer in Stanly County for 30 years. He says he got involved with D.A.R.E. in Stanly because of his previous work with the program in Cabarrus County during the late 1990s.

“I started working with their programs, doing giveaways and bicycle rodeos,” Green said. “I really believe that you can make a difference in a child’s life.”

Green says his favorite part about the job is knowing he is there to assist students if they need it. He also enjoys serving the schools and the community. Green believes the program has made a positive impact on Stanly students.

“I know we can’t affect everyone,” said Green. “But if we affect one child, to make that good choice or good decision in their life and stay away from drugs, then you can’t put a price tag on that.”