Oakboro kicks off the Fourth with firefighter competition 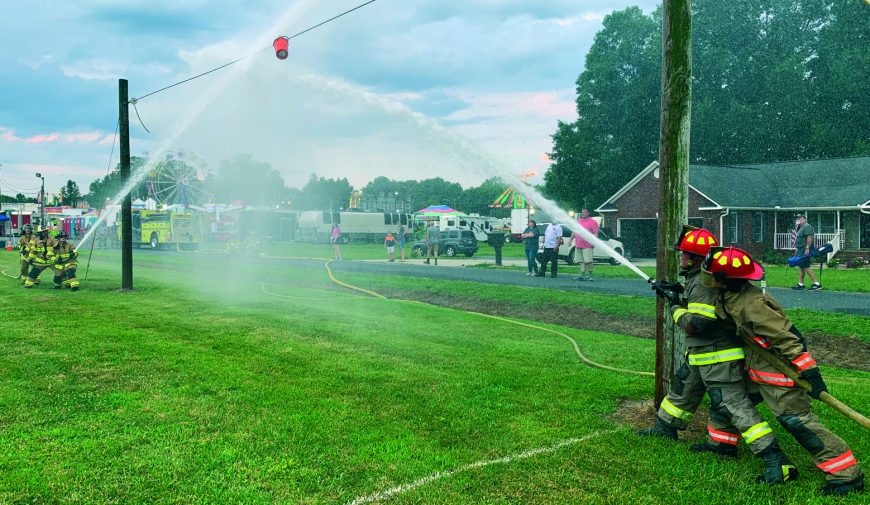 Firefighters compete for honors at the Oakboro Fourth of July Celebration. (Photo by EVAN MOORE)

On Friday evening, Oakboro commenced its Fourth of July celebration with its annual firefighter competition.

About 200 people gathered at the corner of Fourth and College streets to watch local firefighters participate in the event.

The competition is comprised of two contests: a relay and a duel. Both events require teams of three to participate.

In the duel, a bucket is attached to a rope about 20 feet in the air. A team is placed on both sides of the rope, with a fire hose. The objective of the duel is to use the hose to move the bucket to the other team’s side in a designated amount of time.

Bethany firefighters took first place in the duel. Second and third place went to teams from Endy and Badin, respectively.

Oakboro Fire Chief Rodney Eury says the event was inspired by a similar one firefighters around the country compete in.

“Some places call it a fire muster,” said Eury. “It’s pretty much the same thing, just with a different name.”

There is also a competition called firefighter combat challenge, where firefighters travel to different states to compete against one another.

Eury says he appreciates the event because he gets to interact with other local firefighters through friendly competition. He said most of the time when he sees other firefighters, it isn’t for a good reason.

“When we meet each other, someone’s having a bad day because of a fire or something,” Eury said. “With this, it’s friendly competition. We’re all friends here.”

Fourth of July festivities will continue in Oakboro throughout the week. Upcoming events include a community worship service on Sunday, and local talent showcase on Monday.