Post 76 falls in battle for first place to Concord 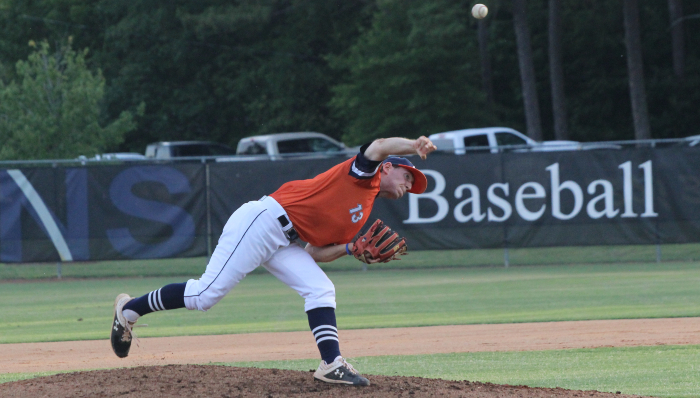 The opening game of a home-at-home series to conclude the regular season for Stanly County Post 76 American Legion baseball opened Monday at home against Concord Post 51.

Concord took a step closer to winning the Area III Southern Division title with a 15-10 win over Stanly at Joe Ferebee Field.

With the win, Concord (11-10, 6-2 div.) forces Stanly (17-6, 5-4) into a must-win situation Tuesday night in the rematch at Mount Pleasant to have a chance at tying Concord for the No. 1 seed from the South in the Area III playoffs.

A win for Post 76 Tuesday would force Concord to win at Kannapolis on Wednesday to earn the division title outright.

“If we can tomorrow we put ourselves in a better situation for the playoffs,” Stanly head coach Jordan Sells said.

A two-run home run from Concord’s Maven Parker in the top of the first inning and an RBI double put the visitors up early, 3-0.

Stanly’s first run of the game came on a sacrifice fly in the bottom of the second off Concord starter Noah Phelps.

The first big inning for Concord came in the third as Post 51 scored six runs on four hits with two critical fielding errors by Stanly scoring four of those runs.

Post 76 fought back to within two runs scoring six times in the bottom of the sixth. Jack Foley drove in two with a single along with a wild pitch and two bases-loaded walks.

Concord matched Stanly with six runs to pull back ahead by eight runs, started with a Jack Cirino two-RBI single.

Stanly tried to rally in the last of the seventh, scoring three runs on a wild pitch, a fielder’s choice and an error, coming up short.

Foley led Stanly going 3-for-4 with a double and two RBIs while Colten Austin and Brady Parker both drove in a run each with bases-loaded walks.

“These kids are going to fight. They don’t go down without a fight. They’ve done it all summer,” Sells said.

“We’ve been a late-inning team all year…it shows this team is going to be in every single ball game if they’re facing a big deficit or not.”