Ever wonder what it’s like to shoot fireworks professionally?

Kim Webster, lead operator at Illuminations Pyrotechnics, gets to experience it firsthand.

Webster has been in the fireworks business for 18 years. She says she got involved through a friend that had done it for several years. 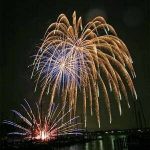 In North Carolina, it is legal to fire poppers, sparklers, fountains and other items that do not explode or leave the ground. Firecrackers, roman candles and bottle rockets are prohibited in N.C.

It’s common for people to think that all types of fireworks are legal on holidays like the Fourth of July, however, this is not true.

Webster, a 911 dispatcher by day, runs the business with her husband, who is a firefighter in Stanly County. She also employs four other people who have emergency service experience with the Albemarle Fire Department and Air National Guard.

“We all had a little background before we got in it,” Webster said. “We know the dangers of it on both sides.”

According to the U.S. Consumer Product Safety Commission, 280 people go to the emergency room every day for fireworks-related injuries in July. Webster said many fireworks mishaps are due to static electricity.

“All of our fireworks come to us in boxes,” Webster said. “If you slide the cardboard box across the floor of one of the trucks, just the friction could cause a spark and it could ignite.

Webster also stressed the importance of technique when it comes to lighting fireworks. She described a time where one of her team members got stitches after a piece of shrapnel hit him in the leg.

“The mortar was not cool enough, and a shell was dropped in it,” Webster said. “The mortar became misshapen, and the shell actually exploded in the mortar. There was shrapnel that went everywhere.”

For now, Webster doesn’t have any plans for her business, other than to keep going as long as she can.

Webster encourages anyone who wants to get involved to go for it, and to be cautious when operating explosives.

“Do it. It’s fun. It’s very much a rush,” Webster said. “If you decide to do it, and you’re not a certified operator, just be careful. Safety is my biggest and main concern.”

Illuminations Pyrotechnics will be doing a show Thursday at Belk-Tonawanda Park in Monroe. Gates will open at 9:30 p.m.