Erwin Elmer Chavis Jr., the man charged with repeatedly ramming a patrol car in Oakboro, is scheduled to appear in court next month after his case was continued Tuesday.

Around 1 a.m. June 20, Chavis allegedly rammed his vehicle into the back of Cpl. David Daigle’s car on Redwood Lane. Chavis then struck Daigle’s car a second time, pushing him down the road, police said. After Daigle accelerated to escape, Chavis hit him twice more.

During the last collision, Daigle’s car temporarily lost power and the suspect’s vehicle hit him at an estimated 70 to 75 mph. 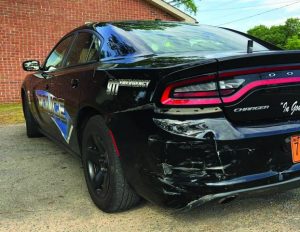 After colliding with Daigle, Chavis headed north toward N.C. Highway 24-27. Daigle pursued and found Chavis’s vehicle parked on a porch on N.C. Highway 205. He began searching the car when Chavis allegedly approached him saying “I have something for you. I got a gun.” Chavis was apprehended and found to be unarmed.

Both Daigle and Chavis were taken to the hospital for evaluation, and have since been released.

Chavis is facing multiple charges, including assault with a deadly weapon with intent to kill, assault on an officer and attempted first degree burglary.

Chavis is scheduled to appear in court Aug. 27.