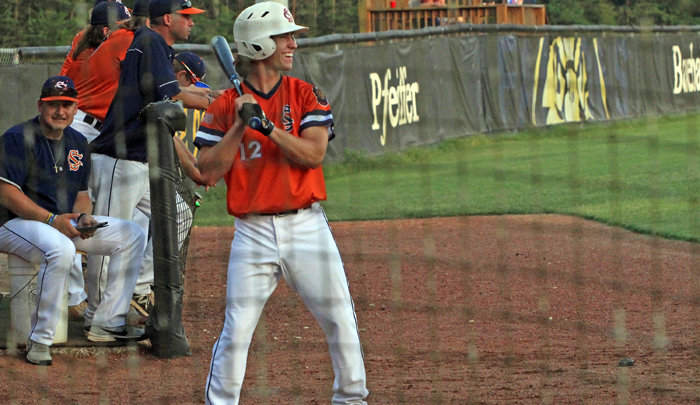 As Friday’s opening-round playoff game for Stanly County Post 76 went on, dark clouds loomed with threatening weather inside them.

The bad weather stayed away long enough for Stanly to take a lead the team did not relinquish as storms eventually forced the early end of the game in the sixth inning, a 3-1 win for Stanly (18-7).

Cody Kidd threw 5.2 solid innings to earn the win for Post 76, allowing one earned run in the top of the fifth on a sacrifice fly. Kidd struck out two and walked one throwing 76 pitches on the night.

“Cody was good for us. He battled and honestly he did not have his best stuff,” Stanly head coach Jordan Sells said.

“He competed and worked hard to get us a win.”

The win for Post 76 ended a three-game losing streak and gave Stanly a 1-0 lead in the best-of-three first-round series.

Trent Wilson relieved Kidd for the final out in the sixth before lightning forced a delay as the bottom of the inning started. Eventually rain forced the game to its conclusion with Stanly earning the win.

Will Dagenhart had two hits to lead Stanly’s offense scoring the first run of the game in the bottom of the first. Kidd helped his own cause early driving Dagenhart in with a double over the head of Kernersville center fielder Blake Youngblood.

Singles by Jack Foley and Colton Austin along with an error and a RBI groundout by Brady Parker in the fourth inning led to Stanly’s other two runs in the game.

The series continues tonight at Joe Ferebee Field in Game 2 starting at 7 p.m.

Before the game, Post 76 is scheduled to present the Don Montgomery Award, given annually to the player or players who best exemplifies dedication, commitment and leadership some of the qualities of the award’s namesake according to information in a previous year’s Post 76 Legion baseball program.