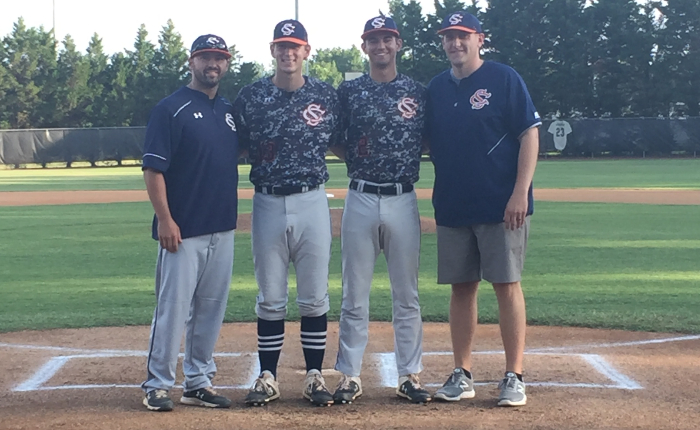 For the second straight American Legion baseball season, Stanly County Post 76 will be playing in the second round of the Area III Playoffs.

The berth into the next round came after Saturday’s 8-3 win over Kernersville Post 36 in the second game of a best-of-three series. The game was played at Joe Ferebee Field on the Pfeiffer campus with Post 76 (19-7) as the visiting team batting in the top of the inning.

With the win, Stanly will take on the team with the most overall wins in Area III this season, Randolph County Post 45 (23-6) starting Tuesday night in Asheboro. The best-of-five series will switch between McCrary Park and Joe Ferebee Field each night until the series is completed. Head to head, the teams each won a home game against the other early in the season.

“Randolph has been one of the most successful programs in our area in the past,” Post 76 head coach Jordan Sells said.

“We definitely have our work cut out for us but I believe in my guys and I believe they will be up to the task.”

Jordan Howard got the win for Stanly on Saturday allowing an earned run on seven hits in four innings with two walks and four strikeouts. A.D. McRae threw two scoreless innings of relief while Carson Lowder pitched around one hit in the seventh to close out the win and the series, two games to none.

“Jordan had another quality start and the bullpen did a great job holding the lead,” Sells said.

“We did the little things right (Saturday). We moved runners when they needed to be moved and scored them when they were in scoring position.”

Hunter Sells drove in two runs in the top of the second after two walks and a wild pitch giving Post 76 the early lead. Sells finished the game 3-for-4 at the plate including a double.

Stanly added two more runs in the third when co-Don Montgomery Award winner Will Dagenhart delivered an RBI single. Cody Kidd made it 4-0 in the inning with an RBI fielder’s choice, the first of his three runs driven in Saturday.

Kernersville (6-13) scored an unearned run in the bottom of the third but Stanly answered the next half-inning with a Travis Wilson RBI fielder’s choice.

Errors led to two more runs for Kernersville in the fourth but Stanly added three more runs over the final three innings.

Before the game, Dagenhart and Ryan Baucom were honored as this year’s Don Montgomery Award winners.