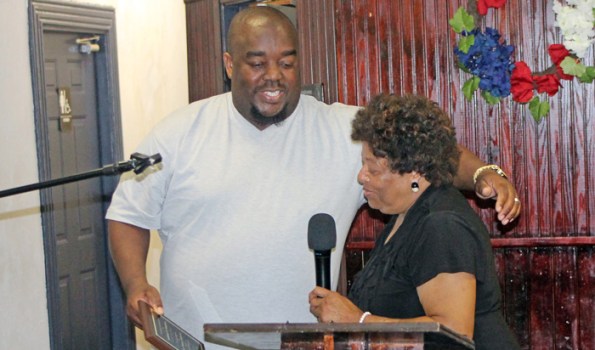 For 26 years, Deloris Chambers and Valerie Tyson have worked to help young people from around Stanly to make the right decisions in life and avoid bad situations.

Former members of Teens Making a Difference and families gathered recently at the Isaiah Westbrook Community Center in Badin for a banquet to celebrate the program’s 26th year of existence.

Anthony Simpson delivered the keynote address at the event, himself a former member of the group, about its impact on his life.

“It was a change for the community to help us go the right way, put a positive vibe back into the community,” Simpson said of the group.

He said when he first was a part of the group, he was kicked out “because I wasn’t focused in.”

Simpson’s nephew, Damian, got interested in Teens Making a Difference by seeing their activities on the local cable channel operated by Stanly Community College.

“(The group) helped him come out of his shell,” Simpson said.

Having moved to Badin as a child, Simpson said one problem with the community now is there is not the same respect.

“We need to get back to the respect,” he said.

He later said he and other fathers in the community are trying to establish a level of respect closer to how things were before.

Simpson was standing on the corner one day when one of the group’s leaders came up to him and said, “You look weak in your eyes.”

Being part of the group “helped me to get myself together to really look at myself…I needed to better myself because there are people looking at us.”

Simpson is now a husband and father of two, along with being an uncle.

“Numerous people in the neighborhood look up to me and I have to show, not just talk it, but show it,” Simpson said.

Groups like Teens Making a Difference are showing youth in the community a better way to go and not just talking about it, which is what youngsters want to see, Simpson said.

“Gangs are showing (youth) stuff. We as part of the people need to show them it’s OK to go to work. It’s OK to read a book. It’s OK to be outside the box.”

Recently, Simpson said he was speaking to someone in the community who was a gang leader and said “you can send people to do this or do that. Have you ever thought about opening a business? If you can run a gang, you can run a business.”

Simpson was visiting his niece one evening with his brother, who asked why she was reading and not watching TV.

“You’ve got to understand that for her that’s entertainment,” he said. “That’s why she gets good grades.”

He and his children pray every night before going to bed, Simpson said.

“I believe in God, that God can change your life. He really can if you believe it,” Simpson said.

Different events like the Easter celebration which had free food and frozen ices for the kids “keep a positive vibe” in the community, he said.

Former Teens member Andra Leigh said she and other members “learned our respect from everyone.”

Leigh said her involvement with Teens Making a Difference helped her onto the path to become a nurse.

After earning her CNA I and II certifications, she failed her nursing boards and changed to earn a major in psychology. She graduated from North Carolina A&T.

“Sometimes you want to see that dream that you saw in the beginning, but you don’t succeed. Sometimes you actually get to (another) goal,” Leigh said.

Leigh has worked in healthcare since 2000 and has opened a new spa business after becoming a licensed esthetician.

“There are going to be bumps in the road. It’s how you handle it,” she said.