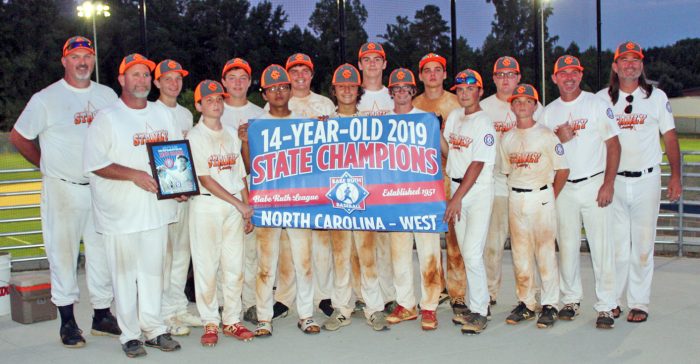 In the opening game Saturday, Stanly trailed after three innings 8-0 but rallied to win 11-9.

Later that day, Stanly fought to a 3-3 tie after three innings with Surry but went on to take the game and the series 7-4.

“This was a great team effort from all the players. Top to bottom, (they) all contributed to the success of this championship,” Stanly head coach Chris Moon said.

Stanly travels to Stafford, Va. July 23-28 for the Southeast Regionals. Currently, five other teams will compete at regionals, including the host Stafford Warriors, the Eastern N.C. champions from Greenville, a team from Lawrenceburg, Tenn. and two teams from Florida — Key West and Fort Caroline.

Donations are needed to help the team get to regionals; those interested can contact head coach Chris Moon.

Sports Editor Charles Curcio can be reached at charles.curcio@stanlynewspress.com.