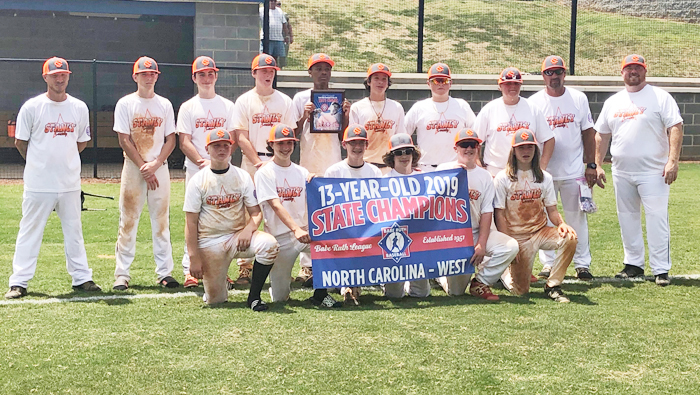 This past weekend, the Stanly County Babe Ruth 13U All-Stars vied for the Western North Carolina state title along with host East Lincoln and Surry County in games played at Lincoln Charter High School in Denver.

Stanly posted three victories on consecutive days to win the crown and advance to regionals.

On Friday, Stanly opened with a 15-1 win over East Lincoln, then followed with an 8-3 victory over Surry on Saturday morning.

East Lincoln eliminated Surry with a 7-3 win late Saturday afternoon to advance to Sunday’s championship round. Stanly secured the title in the tourney with a 14-0 win.

“This was a heck of a defensive team with great bats and lots of talent,” Stanly head coach Richard Huneycutt said.

“(It was a) great effort by all the player and I’m just happy to be part of this team and be able to give this group the chance to compete outside of North Carolina.”

Stanly County will advance to the Southeast Regionals July 23-28 hosted by the team from Williamsburg, Virginia. Greenville won the eastern N.C. title while the Mount Juliet Grizzlies claimed the Eastern Tennessee title. Tallahassee and Sarasota, Florida will also play at regionals along with the defending champions from Glen Allen, Virginia.