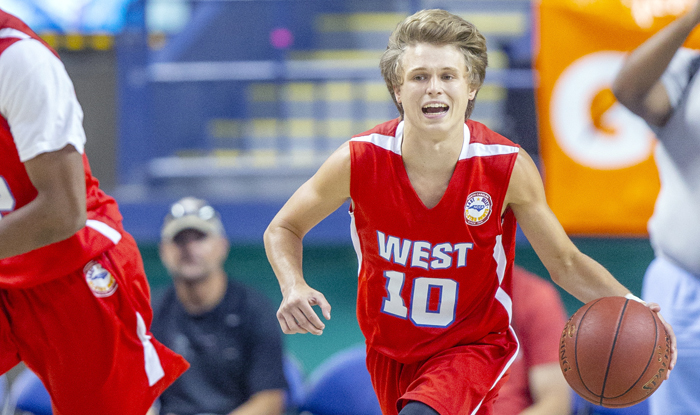 The 2018-19 basketball season saw one North Stanly guard establish a new standard in career points, helping to lead the Comets to the fourth round of the 1A state playoffs.

Bryson Childress, bound for Hargrave Military Academy next season, wrapped up his final game at the high school level Monday night at the North Carolina Coaches Association’s 71st edition of the East-West All-Star Game. His West squad outscored the East in each of the first three quarters and never trailed in the game to earn a 119-80 victory.

He came off the bench for the West squad and played 21 minutes in the 40-minute game, scoring 14 points. He shot 5-of-8 from the field, including 4-of-7 on 3-pointers. He also added four rebounds, two assists and one steal with two turnovers.

Childress became the fourth member in his family and a third-generation player Monday night. His father, Paul, who coached North Stanly last season, represented Albemarle in the 1989 game. Bryson’s uncle, Brad, was a member of the 1986 team, also representing the Bulldogs. His grandfather, Tom, represented Mount Airy in the 1960 game.

“I’m really honored and blessed to carry on a legacy like that to be a third-generation player,” Childress said. “I’ve had a great family that has helped me work hard to earn myself a spot just like my father, uncle and grandfather did. It really meant a lot to me that I could make my family proud playing in this event.”

Regarding playing in Monday’s game, Childress said, “it was really a neat experience being a part of the group of guys we had. You’re surrounded by guys that are all going to play college ball like myself that you can really relate to with the recruiting process and travel basketball.”

The game “served as a platform for me to show I belong with the top tier players in the state and I can produce and win games at the next level as well.”

The North senior said he hoped his efforts in the game “will help me realize some of the things I need to work on going to play at a top tier program like Hargrave.

“I really got a taste of the college style of practice and play and it’s helped me mentally know what to expect when going up there,” he added.

Childress was fourth on the West team in points scored. Southwest Guilford’s Jay’den Turner, earning Most Valuable Player honors, led the West with 24 points. Gavin Raines, representing Wheatmore, had a double-double with 13 points and 16 rebounds.