Spanning the Globe: Runner with one kidney finishes marathons on every continent 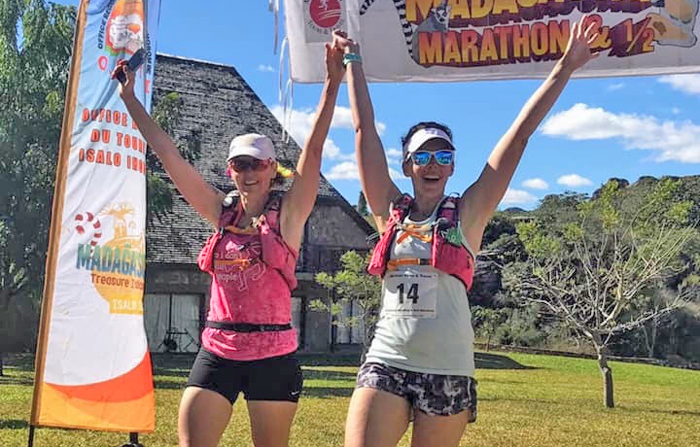 Lynn Allin (left), a local resident and nurse anesthetist, crosses the finish line at a marathon in Madagascar. She finished the race despite being injured. It was one of her 40 marathons she has completed, including runs on all seven continents.

The standard distance for a marathon, 26 miles and 385 yards, correlates to the run in history of a Greek soldier, Pheidippides, reporting the victory of the Battle of Marathon to Athens.

Many runners have the marathon as a goal in their endeavors, but in the case of a select few, running one on all seven continents is a lifelong dream.

Few, if any, have ever completed the feat with one kidney, save for the example of local resident Lynn Allin.

Allin had a side job painting murals in houses and met her friend, Paul Willis, whose primary job was as an electrician. Paul and his wife lived in Nome, Texas, close to China, where she and her husband, Lamar University professor Shawn Allin, lived.

Paul was diagnosed with polycystic kidney disease and underwent dialysis treatment while biding his time on the transplant list.

One of her friend’s other gigs was running the bulls for the Professional Bull Riders rodeo league. A tough cowboy, he was diagnosed after an incident with a bull crushing him into a fence.

He found a donor whom he offered to pay for the kidney, but the potential donor did not qualify to donate.

Allin visited her friend a few weeks after he had made plans to move to Houston to a transplant village. She said her visit came in time to stop her friend from killing himself.

She went home that night to talk to her husband about donating a kidney for Paul. Shawn, who is now deceased, talked to her about why she would keep the kidney since the two had planned to not have children.

The two were tested to see if one could donate a kidney. Lynn was a closer match.

A condition of the transplant before Allin’s involvement was Paul would have to stop drinking beer and riding horses, but Allin said she would have none of that.

“He loved his horses. He wanted to keep riding. That’s just a no-brainer,” Allin said.

Allin and her husband moved to Mobile, Ala., 12 years ago, where her husband took his own life. Alone, she moved to Vermont to be closer to her family, jokingly calling the state “the 12th Canadian province.”

She went back to graduate school to become a certified registered nurse anesthetist. It was there she met her second husband, a Georgia native.

Splitting work between New York and North Carolina, Allin found her way to Albemarle, where she became a part of the running community.

“We have the most amazing running community,” Allin said.

She ran in 5K races before her kidney donation, but never a marathon. She ended up running her first half-marathon six weeks after donating the kidney because she had undergone laparoscopic surgery and was able to get back on her feet more quickly. The motivation came to run with her sister, Tracy Cross, who lives in England.

Continuing to increase the distance of her running, Allin decided to run on all seven continents because it would be easier then running in all 50 states.

“I love little wee towns, but I love seeing what the planet has to offer. I’ve always had wanderlust. I’ve always wanted to go and see and experience,” Allin said.

Her first international marathon was in Perth, Australia, where her sister lived. After her sister moved to Wales, Allin traveled with her to Scotland for another marathon. 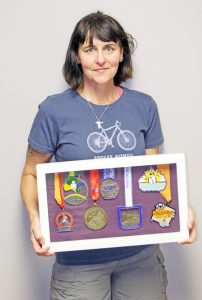 Lynn Allin displays the medals she has earned from all seven continents running a combination of marathons and Ironman triathlons. (Photo by Charles Curcio/staff)

“We made vacations out of the (marathons),” she said.

With only one kidney, she was concerned about electrolytes and diet while running the races.

“You have to be a little careful.”

Other marathons included the Boston one and the Marine Corps run in Washington, D.C. She also has entered runs in Madagascar, Brazil and Antarctica.

Along with the marathons, Allin said she would do touristy things. For example, in Madagascar she visited a lemur rescue facility. Other trips included horseback riding, spas or scuba diving.

“(The marathon) is just an activity among another series of activities,” Allin said.

While Antarctica had 20 degrees below zero and gusts of up to 40 mph and the Madagascar run happened when she was injured, neither were her most challenging.

She said the hardest run of her 40 she has completed was on the Great Wall of China.

Called “Conquer from the Wall,” the run is 20 miles on the Wall and six off it. The day she ran, Allin said the heat was oppressive. Combined with the elevation changes and stairs up to 18-inches high, the run was the biggest challenge. (Sports Editor’s Note: The following paragraph was corrected to reflect the correct number of miles run on and off the wall as well as the race’s name.)

Along with the heat, having to run through clouds of smoke from people on the walk smoking cigarettes added to the challenge.

“I laid down at one point and could not get my heart rate down…a storm blew in, the tourists disappeared and the temperature dropped like 50 degrees. And I couldn’t feel my hands,” she said.

Going down the stairs, which were slick due to rain, presented more of a challenge. She said she went from believing she would get hyperthermia to hypothermia all in one race.

After the run, she thought she might be suffering from rhabdomyolysis, which is a breakdown of muscle tissue into the bloodstream which can lead to kidney failure.

“I thought, ‘I’ve done it. I’ve just killed my kidney.’ But I had to finish because my sister, who was supposed to join me for that vacation, was having chemotherapy,” Allin said.

She said she believes the best way to see a place on vacation is to run a marathon because the courses are designed to go by historical sites and icons.

Allin said the reason she has shared her story was for families to have the conversation about organ donations.

She urges people to let family members know how important donating an organ is. Having worked in the healthcare field, Allin said she has witnessed a number of organs not be harvested.

“People don’t understand the process,” she said. “People have these bizarre fears about it because they’ve never talked to their family. So even if you’ve signed your organ donor card, your mom can say she wants all his organs to be with him.”