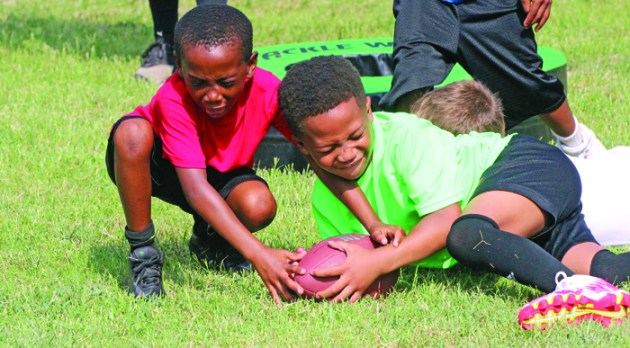 Jay Anthony Stokes (left) and Amir McAuley are all smiles while trying to recover a fumble during a drill with the five and six-year olds. (Photo by Charles Curcio/staff) 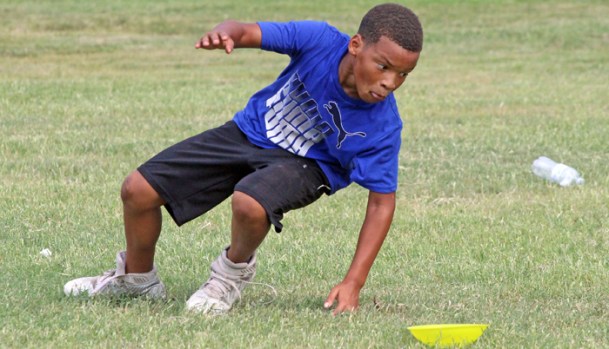 Jaden Blackmon works on his agility while switfly daring past a cone. (Photo by Charles Curcio/staff)

Youth football players from Stanly and the surrounding areas have a new opportunity to play the game from an early age at a different level of competition.

The program has been conducting football camps at Chuck Morehead Park. Attendance numbers have been around 50 or more athletes each day. The first Timberwolves camp had 67 participants.

Kids as young as 5 can play AAU football. The Timberwolves plan to field teams at five age levels — 6 and under, 8U, 10U, 12U and 14U. Should the program continue to grow, Timberwolves president Justin Lenderman said a flag-football team for 3- and 4-year-olds may be started.

Blackmon said he decided to begin this program after playing some semipro football with the Carolina Bears, a spring travel team in Concord.

“I just fell in love with the idea of seeing kids come together and play different kids from different areas,” Blackmon said.

Blackmon said he feels because of the large number of talented players from the county, their kids, many of whom participated in the camps, would benefit from the new program.

“The apple doesn’t fall far from the tree,” Blackmon said. “This would be a great opportunity for these kids to get some exposure and play other kids outside of Stanly County before high school.”

Blackmon said a united program for the county would be “a great opportunity to unite the community.”

Lenderman said the goals of the team are to also unite players from beyond Stanly’s borders, like Montgomery, Anson and Cabarrus counties.

“This is a higher level of competition. We play statewide. We play at the national level,” Lenderman said.

The program’s president said he thought there were a lot of talented players out on the field “but nobody sees them. They only play against each other inside a little box.”

One of Stanly’s first competitions will be in a jamboree in High Point Aug. 17 where around 35 organizations will participate.

Lenderman said in high school the only chance most players get to compete against teams from around the state comes during the state playoffs.

“So we’re just trying to get that experience level at a younger age, which in turn when they get to that high school level, they are not new to it. They’ve already played these boys growing up,” Lenderman said.

Blackmon said the parents of the kids have supported the coaching staff and “love the way we do what we do with their kids.”

He said he wishes he had been able when he was younger to get in extra work on the game like the Timberwolves players receive.

“I had nobody start with me at that age. I started playing tackle at 6,” Blackmon said.

“At that age, I didn’t have that knowledge at all. As successful as I was in high school, I feel like with them getting extra (practice), they will be way more successful than I was.”

The expanded AAU season will give kids more chances to play as well, with a seven-game regular season, conference playoffs and championships, state and national playoffs along with All-Star competitions, Lenderman said.

“The more reps you get, the more the kid is able to improve their skills as far as football goes.”

Lenderman credited the coaches for the amount of time they have spent with the players, who are using sick and holiday time from their jobs to be able to coach for the Timberwolves.

“These coaches are here for these kids, every single one of them.”

More information on the Timberwolves is available at www.leaguelineup.com/stanlycountytimberwolves or by calling 910-975-7862 or 980-439-4625.