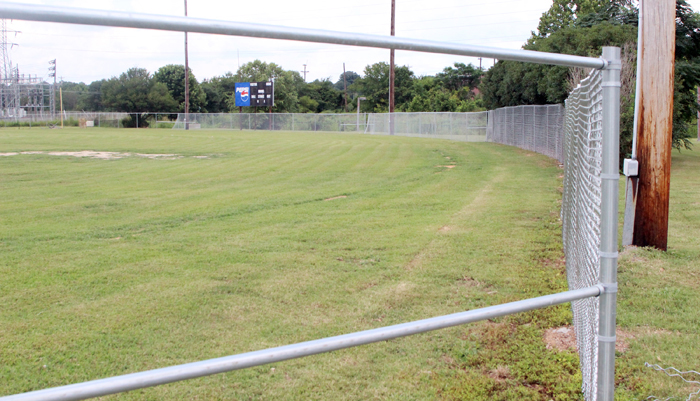 Fencing around the outfield of Don Montgomery Park continues to be installed. (Photo by Charles Curcio/staff)

Youth baseball will soon be able to return to some amount of business as usual, according to a recent report given at an Albemarle City Council meeting.

Albemarle Parks and Recreation Director Lisa Kiser gave a report of the progress of renovations to several of the fields damaged from hurricanes last year. (Sports Editor’s Note: The previous sentence was corrected from the print edition.)

Kiser informed the Council about when the city will be getting reimbursement back from the Federal Emergency Management Association as well as an update on the rebuilding of the baseball fields at Don Montgomery and Optimist parks.

Fencing has gone up this week for both fields, Kiser said, while the planting of grass for the outfields will also start soon. A windscreen for Don Montgomery Park will be replaced as well.

She said the expectations for the fields are to have Optimist Field open for fall ball, while the Albemarle High School baseball team will have their home field back for the spring 2020 season.

The projects at the two baseball fields, along with repairs to Rock Creek Park and the greenway, were approved by FEMA in October of last year.

“We’re almost finished with the scoping, which means getting all the totals. Once we do that, we will be able to start applying for some of the reimbursement for what we have sent,” Kiser said.

One team whose future at Don Montgomery Park has not been determined yet is the Stanly County Post 76 American Legion Baseball team.

“I want to wait and see what the improvements are going to do,” Post 76 commander Cal Massingale said.

Massingale said in conversations he had with AP&R, improvements were going to happen to the field including a new scoreboard and replacing some lights along with possible improvements to the restroom facility.

No decision on whether or not the team will move back to Albemarle after playing games at Pfeiffer’s Joe Ferebee Field will be made without consulting the opinions of head coach Jordan Sells, athletic officer Wil Huneycutt.

Playing at Pfeiffer was costly for the post, according to Massingale.

With prepartions for the upcoming Stanly County Fair, which will be Sept. 24-28, the Post is more focused on that, he added.