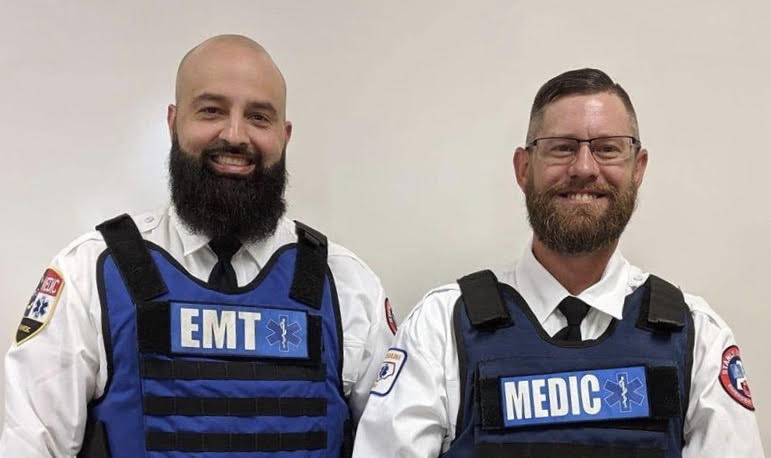 Stanly County paramedics Thomas Basile and Michael Campbell finished in second place at the preliminary round during the 29th annual North Carolina State Paramedic Competition in Fayetteville this month.

There were 50 teams that participated in the round. The top team from this round will move on to compete in the final event at the EMS Expo in Greensboro. Basile and Campbell will serve as alternates, in case one of the teams cannot participate.

The preliminary round consists of two parts: a written test and a practical scenario. Judges at the competition also score teams on professionalism.

According to Basile, the scenario is largely based on hands-on paramedic skills. He said the scenarios are based on situations that could happen in real life.

This year the scenario involved saving the lives of three patients. Basile said instructors told him any of the patients could die at any moment. To do well in the competition, Basile said paramedics have to complete tasks efficiently and complete them in order.

Campbell and Basile were able to save the lives of two of the individuals.

In Basile’s opinion, the written test is the tougher of the two challenges. The test is a mix of multiple choice and fill-in-the-blank questions, with a bonus question at the end. He said doctors came up with the questions to ask and included a lot of questions where math was involved.

“The bonus question is very specific to something,” Basile said. “Most people don’t know it.”

Basile said he and Campbell got paired up a week before the competition because his original partner could not make it. Basile and Campbell did not get an opportunity to practice together, yet they still pulled off a second-place finish.

“If we would have had more time and some better opportunities for training together, we probably could have won the whole thing,” Basile said.

During his 15 years as a paramedic, Basile has participated in the competition four times. This is his second year competing for Stanly County. He competed twice with Cabarrus County.

Basile said his favorite part of the competition is the practical scenario.

“It’s a test of your knowledge and your skills, it’s more than just being book smart,” Basile said. “It encompasses everything we do as paramedics, it exposes you as a person and the weaknesses you have, and I enjoy that. I like to put myself up for evaluation, because I feel like I can only get better if I keep testing my knowledge.”

Basile and Campbell will travel to Greensboro to take part in the state competition on Sept. 29.