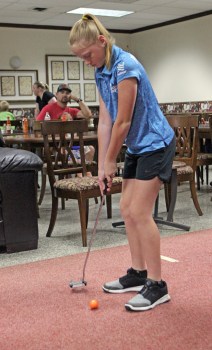 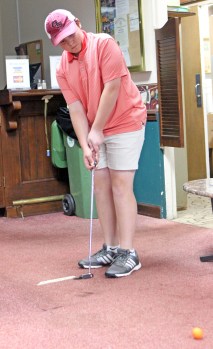 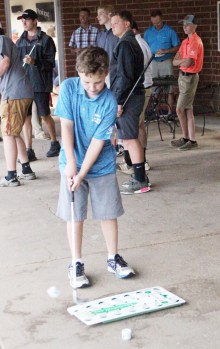 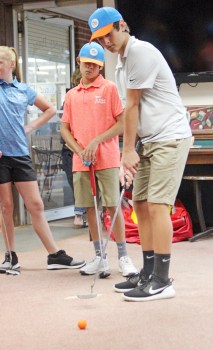 Not even heavy rains could dampen the spirits of young golfers recently at Piney Point Golf Club.

A season-ending golf competition and cookout for the club’s PGA junior golf teams moved from the outside links into the clubhouse.

Head golf pro Dave VanDeventer set up a series of mini golf stations inside the dining room and under the back porch looking out into the putting green for the youngsters. The golfers paired off in a captain’s choice event putting underneath couches and off furniture into targets along with chipping into a net outside as the rain came down.

The two teams from Piney Point play in a summer league against players from McCanless Golf Club in Salisbury. Using a captain’s choice best-ball format, the teams play four matches and earn a flag for every three holes won in match play.

“It’s a lot of fun. They have jerseys and get to meet new friends,” VanDeventer said.

Players on the Piney Point teams, around 15 of them ages 13 and under, come from around Stanly, including Locust and Norwood, but also from Anson County and Cabarrus County.

VanDeventer, a Michigan native, has been a member of the PGA since 1983 and has been Piney Point’s golf pro since 1984. He said programs like the Junior Golf “gives (players) something to look forward to” and the chance to play.

The Piney Point pro said once players become more skilled in golf they can go on to compete in other golf events like the Tarheel Youth Golf Association.

Junior PGA golf “is perfect for kids,” he said. “You don’t have to have played the game. The main thing is to make (the game of golf) a little bit more fun because it is a hard game.”

VanDeventer said the PGA “hit a home run” when it came to creating the junior PGA events which are quicker then a normal 18-hole round of golf. The juniors play nine holes.

The format of playing captain’s choice and having a partner helps to build sportsmanship in young golfers, VanDeventer added, as well as learning how to play the game and having fun. With a triple bogey as the highest score a team can get on each hole, it makes the game faster, but often the team concept keeps the score down further, which is encouraging to young golfers.

“They play from the forward tees…some of the 13-year olds can drive the green,” VanDeventer said.

Similar to other youth sports like baseball and softball, junior PGA golf also features the chance to play on All-Star teams which compete against other young golfers statewide.

Those teams have the chance to play their way into regional competitions and beyond.