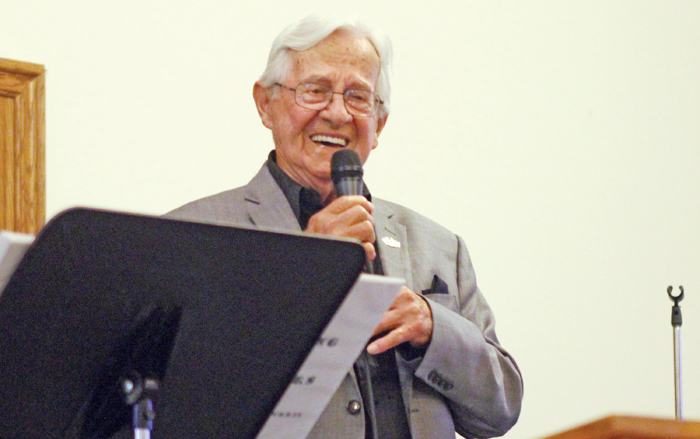 Heath Hahn performs gospel favorites along with the group he founded, the Singing Towers, at a recent performance at Barbee's Grove Baptist Church. (Photo by Charles Curcio/staff)

One musical group with roots in Stanly County presented an evening of gospel favorites while also celebrating one of its founding members.

The Singing Towers performed in front of a full sanctuary at Barbee’s Grove Baptist Church on Sunday.

Founding member and bass singer Heath Hahn, 92, sang in front of a number of family members as he celebrated 48 years of performing in the group.

Leonard Harvell, a founding member of the Towers, along with lead singer Larry Burris and the Rev. Kerry Burris singing baritone, opened the performance with an a cappella rendition of “Amazing Grace.”

“You won’t find a better sound than we have,” Hahn said.

Having been in gospel singing long before the formation of the group, Hahn sang in church and with other groups, including the Apostles of Charlotte.

“I decided to form my own group so we could run it like we wanted to,” Hahn said.
“If you sing with someone else you have to go with their flag.”

The current lineup of singers, Hahn said, are true professionals and have sung everywhere from Alabama to Ohio, around 14 different states.

The Towers have recorded albums in various formats around 34 times over the years. A recording studio has been set up at Hahn’s home.

“It just works out when you’ve got the work so close to you,” Hahn said.

Making money for the sake of profit to make a living has never been what the Singing Towers have been about. Hahn said travel expenses takes a lot of what is earned by the group.

“You can’t imagine the hours it takes to keep this thing going,” Hahn said.

Before the advent of backing tracks, the Towers carried in the tour bus with them a full band of musicians.

“It took a good-sized vehicle to do that,” Hahn said.

What the goal of the group truly is, Hahn added, was spreading the gospel of Jesus while seeing the enjoyment of people respond to their singing.

“The message is the heart of the thing. We won’t sing a song if it’s not based on the word of the Bible.”